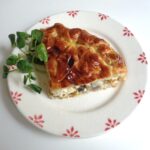 This savory pie of chicken, mushrooms and leeks in a creamy sauce encased in puff pastry (pâte feuilletée) makes a lovely autumn dish for lunch or a light supper. Full disclosure: I don’t make the pastry myself, but instead use a couple rolls of high-quality, all-butter store-bought puff pastry. This saves a lot of time. Then all you need to do is invite a couple of guests, make a salad, open a bottle of wine and voilà — your meal is ready.

But what exactly is a tourte? When English-speakers associate the words ‘French’ and ‘pie’, they are likely to think of the open-faced pastries that are so splendidly displayed in France’s patisseries, such as quiche or fruit tarts. The double-crusted tourte is seen less often here, yet it has a long and venerable history, having existed since Roman times.

Although versions with fruit exist, a tourte is most often savory, filled with meat, veggies, cheese or a combination. It comes in many variations across France. A common tourte in the rugged Auvergne region combines potatoes and fourme d’Ambert, the local blue cheese. A specialty of the Mediterranean port of Sète is tielle, which is filled with octopus. In eastern France, the tourte lorraine combines pork and veal (and sometimes rabbit) into a filling that resembles pâté. And the list goes on.

Across the Channel, where the British have made an art of the meat pie, the pastry of choice is a standard savory crust (pâte brisée), whereas the French prefer flaky puff pastry. I thought about it before creating today’s recipe, and opted for the latter. It makes for a lighter dish and adds, you know, that little je ne sais quoi.

Preparation involves sautéing the chicken, mushrooms and leek or onion and making a Béchamel sauce flavored with nutmeg, white wine and a little fresh thyme. When you’ve filled your pie, you can coat the top with a light egg wash to give it a pretty shine. 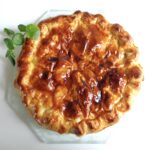 To allow steam to escape while the pie is baking, the French often cut a coin-shaped round out of the center of the top crust and insert a rolled piece of paper to create a chimney (cheminée). But I chose instead to cut a few slits into the top and, with leftover pâte feuilletée, added some cut-out diamonds for decoration. No sooner did the pie come out of the oven than it disappeared.

This entry was posted in 4a. Savory Tarts and Tartines and tagged chicken mushroom pie, recette, recipe, tourte. Bookmark the permalink.