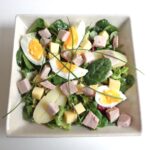 This salad is a Paris bistro classic — tender leaves bathed in a light mustard vinaigrette and topped with cubed ham and cheese, boiled potatoes and quartered eggs. Or with other ingredients. Green beans, tomatoes, mushrooms, croutons, you name it. It’s a salad I’ve never encountered in a Parisian home, yet it is omnipresent in Paris cafés. I’ve put off posting about it for years for the simple reason that no one can agree on what it actually is.

Looking for answers, I went to my sourcebook, the Grand Larousse gastronomique, and drew a blank. This encyclopedia of French cuisine has five pages of tiny print on the topic of salad, including 34 recipes, several by three-star chefs (Michel Guérard, Joël Robuchon, Alain Senderens, like that). There is what they call salade américaine (with pineapple, sweet corn, chicken, cucumber and egg — like, what?) and salade russe (chopped cooked veggies in mayonnaise), but nary a mention of France’s home-grown salade parisienne.

Further research indicated that the salad got its name from … mushrooms, which by the way are rarely seen in salade parisienne these days. The connection is that standard white mushrooms are known here as champignons de Paris. Introduced in France by the gardener of King Louis XIV, they were cultivated in abandoned quarries on the edges of Paris until the late 19th century, when production shifted elsewhere due to construction of the Métro. (In an odd twist to this tale, some of these mushroom-growing quarries were actually the Paris catacombs, where the bones of millions of Parisians are stored, having been there transferred long ago due to overcrowding of the city’s cemeteries.)

Back to the salad, which has evolved since I first encountered it in Paris nearly 50 years ago. In those days, the ingredients were piled onto a bed of Boston lettuce (laitue), traditionally the most popular salad leaf over here. These days, a mixture of tender leaves such as mesclun is more commonly used. When I lunched last week at a local café, Le Progrès, I took a photo of their menu to give you an idea. Their salade parisienne is composed of mesclun, potatoes, egg, ham and Emmenthal cheese.

How, you may well ask, does this salad differ from the ‘chef’s salad’ served in the States? First, it never comes with iceberg lettuce. Second, the presentation is not the same. But the most important difference is in the dressing. The mustard vinaigrette, with its slight tang of garlic, unites the ingredients and gives the salad a flavor that is sublimely French.

Today’s recipe is very close to the version served at Le Progrès. It’s a hearty salad that can stand on its own at lunchtime or as a light supper, accompanied by fresh crusty bread and, if wine is called for, perhaps a Beaujolais, such as Brouilly or Fleurie. If you’d like to vary the composition, feel free. For a vegetarian version, you could replace the ham with green beans or tomatoes, for example. Ditto for a vegan version — just also eliminate the cheese.

These variations are entirely within the range of what passes as a salade parisienne. While doing online research for this post, I found recipes calling for widely diverse ingredients, such as the one from Elle magazine’s culinary edition. It calls for potatoes, green beans, Boston lettuce, hard-boiled eggs (so far so good) but also green pepper, onions, artichoke hearts, parsley, tomatoes, tuna, anchovies and black olives! This sounds more like a salade niçoise to me. But with salade parisienne, apparently anything goes.

So go wild, use your imagination, and create the Paris bistro salad of your choosing.

This entry was posted in 3. Salads and tagged paris bistro salad, recette, recipe, salad with ham and cheese, salade parisienne. Bookmark the permalink.