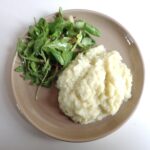 Many years ago, when making boeuf bourguinon for a party, I discovered a sophisticated side dish with laughably humble origins — cabbage purée. How I discovered it is a mystery. I thought it might have been via Patricia Wells, but when I looked through her cookbooks it wasn’t there. Perhaps it was Julia Child? Negative. Well, whatever. I’ve been making it for years, and am always delighted when my guests can’t figure out what it is.

Yes, that’s the second mystery. On the plate, people mistake if for mashed potatoes. But when they taste it — ooh là là. Not the same. As we are moving towards Thanksgiving and then Christmas, I wanted to share this recipe with you in time for you to think about perhaps innovating this year with a dish that is both simple to make and lovely to behold.

Meantime regular readers of this blog will know that I enjoy not just cooking but also word play. So while we’re on the subject of chou (cabbage), it’s one of those words in French that has evolved over the centuries to embrace many meanings. The most obvious, from a culinary perspective, is ‘cream puff’ (also chou), presumably because these puffy pastries could, if you used your imagination, look like mini heads of cabbage.

Linguistically that’s just the beginning. Say you’re a journalist. You’d like to cast aspersions on your rival’s newspaper? Quelle feuille de chou! Literally: ‘What a cabbage leaf!!’ Figuratively: ‘What a rag!’ Or if your rival writer can’t cut the mustard? Il est dans les choux. ‘He’s in the cabbage patch.’ (‘He’s floundering.’) You really want to insult him? Il est bête comme un chou. ‘He’s as stupid as a cabbage.’ (‘Quel dumb cluck.’)

But there’s sweeter side as well. Your tiny tot is amazing? Je t’aime, mon petit chou. Literally: ‘I love you, my little cabbage.’ Figuratively: ‘My little cupcake.’ Your boyfriend gives you a present? Trop chou! (‘Too cute!’) That guy’s amazing and you’re telling your friend about him? Il est chou. (‘He’s adorable.’) You’re telling him he’s amazing? T’es mon chouchou. ‘You’re my sweetiepie.’  (But be careful — chouchou is also French for scrunchy, as in the ponytail holders favored by Carrie Bradshaw in ‘Sex in the City’.)

And then there’s the childhood ditty ‘Savez-vous planter les choux?‘ As the song goes, ‘Do you know how to plant cabbages, they way we do it here?’ Well, by the time the song is finished you know that the French plant cabbages with their foot, with their knee, with their nose and with their elbow… But that’s enough silliness for today.

Chou en purée can be made either with standard white cabbage, which produces the mashed potato effect, or with curly Savoy cabbage, which produces a pale green purée with darker green flecks. It’s both quick to prepare and ultra inexpensive, and will marry happily with roast turkey, beef or chicken, with other veggies (such as roasted winter vegetables or sweet potato purée) or, well, with boeuf bourguignon.