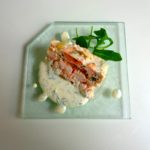 A light start to a meal of a warm summer’s evening is a fish terrine — in this case, a terrine of salmon, shrimp and sea scallops, with a sauce flavored with curry and dill. For years I have enjoyed the fish terrines on offer at Parisian food shops, where they beckon elegantly in multicolor slices. But I only recently began making them. And the good news is that it’s fun. It requires a French technique known as bain-marie.

Bain-marie, which translates as ‘Mary’s bath’, involves setting a pan of boiling water on the stove or in the oven and placing whatever you happen to be cooking on top. On the stove, it’s the equivalent of a double boiler, while in baking it is used in the creation of various dishes, among them crème caramel. I’ve been using the technique for years, but not until sitting down to write up this recipe did I start to wonder how it got it’s unusual name — and in particular, who the heck was Mary?

As it turns out, she was an ancient sage and alchemist variously known as ‘Mary the Jewess’, ‘Mary the Prophetess’ and ‘Daughter of Plato’, and is (not totally reliably) said to have discovered hydrochloric acid and to have inspired Carl Jung. When and where she lived is unclear. She is variously said to have met up in Memphis, Egypt, with Democritus of Greece (he lived from around 460-370 BC) and to have learned the art of making gold from Aristotle (384-322 BC) at the court of Alexander the Great. In one poetic account, she is described as a Syrian princess.

Whoever Mary was, we who dabble in culinary alchemy owe her quite a lot. And, thanks to the French, her name has been preserved through the centuries. If the weather gets so hot, as it has in Paris recently, that you feel you might be in Syria or Egypt, put on your apron, whip up a fish terrine and think of Mary.