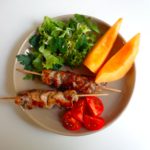 This is the time of year when I’m either in the country stoking up the barbecue or dreaming of being there. At the moment, as Paris swelters through its second heatwave of this young summer, I’m still dreaming. But that won’t prevent me from making grilled chicken on wooden skewers — au contraire. It’s a perfect dish for hot summer weather, even at home, as it can be prepared on the stovetop in a matter of minutes with minimal fuss.

Before being grilled, the chicken is marinated in a sauce of red wine, olive oil, garlic and thyme. I like to serve these brochettes with a garlicky yogurt sauce — or, for a Middle Eastern touch, with tahini drizzled on top. The chicken kebabs can be accompanied by a simple garnish, like a couple slices of melon and some chopped tomatoes, as in the photo, or by something more substantial, for example ratatouille, roasted eggplant slices, chick pea salad with cumin and dill, tabbouleh or French potato salad.

Variations on this dish have most likely existed since the dawn of time — or rather, since our human predecessors gained control of fire around a million years ago. We had pointed stone tools by then, and blades would follow in another 500,000 years. So it was simple: cut the meat into chunks, insert it on sticks, set the sticks over a pit filled with hot stones and voilà — kebabs for dinner. Of course, first they had to get lucky during the hunt…

It’s easier these days, when you can just go buy the meat. The little wooden brochettes are available in supermarkets and Asian food shops. With the heat persisting in Paris — and with President Macron planning to host a certain American on Bastille Day next week — I plan to get out of town and fire up the barby. As the saying goes, if you can’t take the heat, get out of the kitchen. And in summertime, that sounds like a fine thing to do.