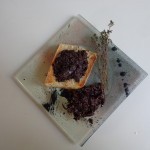 The very thought of this flavor-packed spread evokes gnarled olive groves and thyme growing wild by the side of the road in southern France, where tapenade originated. Ubiquitous in Provence, it is usually made with black olives, but green olives are sometimes used. It may be made with garlic or without, with a dash of cognac or none. You can serve it on toast or as a dip at cocktail hour, and it also works well as a sauce for fish.

Now some news. I was approached this week by an American book publisher about possibly doing a cookbook for their series. The up-side was that I would finally have accomplished my dream of publishing a recipe book. One down-side was that it would not be The Everyday French Chef Cookbook, but would bear a different title with little reference made to this site. The other down-side was that they needed the material by mid-July — 300 recipes and 150 sidebars! And photos too. That appeared to me to be a superhuman task, and in the end we decided we were not a perfect fit.

Nonetheless, this experience fired me up again for the idea of doing a cookbook. Certainly not by mid-July, but maybe in the year ahead. And once again, I’d like to ask for your feedback. Would you prefer an all-encompassing book on French cuisine à la Julia Child, but modernized and simplified? Or would you rather see a series of smaller books on specific categories of food — soups, vegetables, desserts, etc. — or perhaps four volumes on seasonal cooking? I can’t really pay you for this, but I’d like to offer a free cooking lesson to anyone who replies — next time you come to Paris. In the meantime, happy cooking!