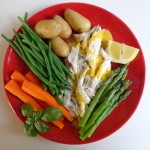 Sea bass, variously known in France as bar (in the north) and loup (in the south), is highly prized because of its delicate flavor and succulent flesh. It is often grilled with fennel stalks over grapevine cuttings during barbecue season. At other times of year, it may be oven-roasted and served with aïoli, southern France’s garlicky take on homemade mayonnaise. Surround it with vegetables, and you have a ready-made main course.

This dish is a variation on le grand aïoli, another full course meal with vegetables and fish, generally cod, as well as eggs, olives, tomatoes and chick peas. Both of these dishes may be served warm or at room temperature, but personally I prefer my sea bass nice and hot. Total cooking time is about half an hour. In the recipe, I also explain how to bone and fillet a fish, French-style. No video on this yet, but maybe one of these days…

Meantime, I had dinner last night with a couple of visiting American friends at one of my favorite restaurants, Le Repaire de Cartouche, where the chef Rodolphe Paquin has just redecorated. Imagine my surprise when my friend Bob announced he had become a vegan. He’s an athletic all-American type guy from Iowa. Never imagined he’d give up meat, fish, eggs, butter, cream and cheese — rather a challenge when dining out in France. As it turned out, it was not a problem. He chose white asparagus with truffle oil. When the food arrived, his asparagus was so thick that two spears filled an entire plate, each more than an inch (2.5 cm) in diameter! The spears were sprinkled with finely chopped black olives and shallots, and bathed in the truffle oil. I had a taste — quite delicious.

Site news: With the advent of spring, I have updated the Everyday Menus for omnivores, vegetarians and vegans, and will continue with the Weekend Menus over the next couple of days. We’ve been having alternately sunny days and rainy days here in Paris, but it’s generally been a beautiful spring. As they say in France, ‘En mai, fais ce qu’il te plaît‘ (‘In May, do as you please’). One of the reasons I love this country. Happy cooking!