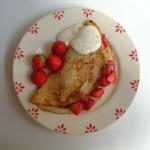 I spent years looking for a good crepe recipe until my daughter finally presented me with one. She found it in a French children’s cookbook — and indeed, once you get the hang of it, preparing crepes is child’s play. The ingredients couldn’t be simpler: flour, an egg, milk and a little vanilla. But the proportions, ah the proportions! Too much egg will turn your crepe into an omelet. Some French crepe recipes call for water instead of milk, and the resulting pancake tastes like cardboard. These strawberry crepes, in contrast, are tender and flavorful, a delightful concoction for spring.

As you may know if you live in France, but for the benefit of those who don’t, dessert crepes and savory crepes are made here with different kinds of flour. White wheat flour is used for the dessert variety given in this recipe, while buckwheat flour is used for savory crepes. Buckwheat (which, by the way, is gluten free) is known in French as blé noir or, more commonly, sarrasin. The word — Saracen in English — was used in the Middle Ages to denote Muslims from Arabia and, later, the Moors who migrated from North Africa to Spain and then into France. Darker complexioned than Europeans, they lent their name to buckwheat and the flour and crepes derived from it.

Now then. I’d like to give hearty thanks to all of you who responded to my call for ideas about a possible Everyday French Chef cookbook (you can see the replies at the bottom of my previous post). The consensus seems to be a book on modern everyday French cuisine organized in a seasonal way. I love that idea! Thank you. Now I’ll just have to (pardon the expression) carve out enough time to write it. In the meantime, happy cooking.

This entry was posted in Desserts and tagged crepes, dessert, recipe, sarrasin, strawberries. Bookmark the permalink.