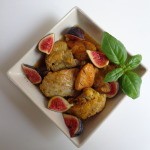 Figs, apples and pomegranates have been much on my mind lately — partly because they are at their ripest and most delicious in the autumn, and partly for other (historical, anecdotal) reasons. One consequence is the creation in my kitchen this week of a chicken fricassée enhanced with the flavors of saffron, cinnamon and cumin and sweetened with honey and fresh figs.

Now then, about the fruit. When I was a child growing up in Wisconsin, the only figs we ever saw were the dried variety, prettily wrapped in cellophane and delivered to our home as gifts from relatives for the December holidays. It wasn’t until I reached the southern French city of Avignon at the age of 19 that I encountered a fresh fig, its sensual purple skin hiding a lush, red interior. When I bit into it, I felt like I was committing original sin.

And why not? The fig, after all, goes all the way back to Adam and Eve, who used fig leaves in the Garden of Eden to cover their nakedness after tasting the fruit of the Tree of Knowledge. And what was that fruit? It is typically represented as an apple — the fruit that Jews around the world are dipping in honey this week to mark the start of the new year — but I suspect it may actually have been a pomegranate. Why? For one thing, the pomegranate is native to Persia and the Holy Land, where the earliest civilizations thrived, while the apple is believed to be native to Turkey, which was settled by early humans later. For another, the apple (pomme in French) and the pomegranate have etymological ties. Both words derive from the Latin pomum. One can easily imagine that there may have been linguistic slippage at some point along the way among the first drafters of the Bible…

Or was it a fig? My deeper interest at the moment, tied to my new book project, is in human prehistory — and here’s an interesting factlet. Archaeologists believe that cultivation of figs goes back at least 11,000 years. They have dated fossils of sterile varieties of the fruit that were found in the Jordan Valley north of Jericho. That makes the fig one of the oldest foods ever produced by the world’s first farmers as humanity segued from millennia as roaming hunter-gatherers into settled communities of cultivators.

All I have to say to those early ancestors is, ‘Thank you.’

And to you, dear readers, ‘Happy cooking!’