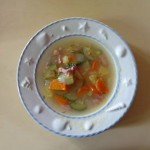 When the days grow shorter and there’s a nip in the air, what could be better than a hearty bowl of soup? This version, with vegetables and bacon, is what French farm families had for supper in the old days, and sometimes still do. In fact the word ‘supper’ — le souper in French — derives from this ancient custom. You can top the soup with grated cheese and make a meal of it, serving a salad on the side and following up with cheese and fruit. Healthy and easy to make, it’s one of my favorite dishes.

Meantime I’ve been doing less home cooking than usual this week, instead spending my culinary time making corn bread. This morning I head down to Vonnas in eastern France, south of Burgundy and north of Lyon, where many people likely still sup on soup. Thanks to the French-German television channel Arte, which is filming an episode for their new series on food and art, I will be enjoying an early Thanksgiving lunch prepared by Georges Blanc, one of a handful of three-star French chefs. That’s the top. 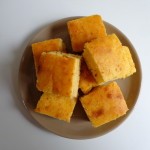 As I mentioned last week, I’ve been asked by Arte to bring along some corn bread for the three-star Thanksgiving table. Quite a challenge! Many of you sent recipes, for which many thanks. I’ve tried quite a number of them, all delicious, and have now worked out the proportions that seem right for this particular experiment. And how will Georges Blanc reinterpret Thanksgiving? Next week I will tell all…

This entry was posted in 2. Soups and tagged french vegetable soup with bacon, lardons, legumes, recipe, soupe. Bookmark the permalink.