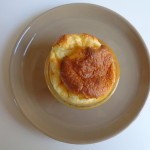 Light but ever so tasty, these little goat cheese soufflés are guaranteed to get your meal off to a dramatic start. They look like a tall chef’s hat when they come out of the oven, and as you bring them to the table your guests will exclaim in delight. Then comes the moment when they plunge their spoons into the puffy treat and taste the pungent flavors of chèvre and dill. Sighs of pleasure all around — and it’s the start of a great dinner party. 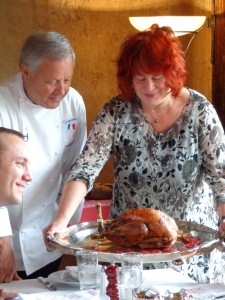 Now, I suspect some of you may be wondering what happened when I went to Vonnas last Friday for a three-star Thanksgiving lunch with Georges Blanc (that’s me, serving the turkey as one of the world’s greatest chefs looks on). I have promised to tell all, and I will in a moment. But first, here’s an update on the subscription drive.

There are only three days left to win an autographed copy of Ann Mah’s brand new book, Mastering the Art of French Eating, which hit America’s bookstores yesterday with advance rave reviews.

This prize will go to the person who brings me the most new subscribers, here and on my Facebook page, by September 30. In order to win, you need to provide me with a list of the people you’ve brought to the site. I need these lists in the next three days — you can send them in via the Contact page. The winner will be announced here on October 1. But I can already tell you that the number of people following The Everyday French Chef has increased by nearly 20 percent since the start of the contest on August 30. Many thanks to all of you!

And now to Vonnas, north of Lyon, where I traveled last Friday to take part in an episode of a new series on art and food being filmed by the French-German television channel Arte. Georges Blanc had been tasked with creating a Thanksgiving meal based on Norman Rockwell’s 1943 painting ‘Freedom From Want’ (a copy of the painting at right, beneath a portrait of Blanc’s mother and grandmother in the kitchen) — and I had been tasked with bringing the cranberry sauce and the corn bread! My dishes were set on the table with the feast Blanc prepared, definitely a French take on America’s favorite holiday. Here’s what he served:

A dinde de Bresse, possibly the world most succulent roast turkey (it was raised locally in the Bresse region surrounding Vonnas),
Roasted fresh figs and pan-seared porcinis,
A compact stuffing made of ground veal and pork, with walnuts and thyme instead of chestnuts and sage,
And a supremely rich and flavorful pumpkin gratin.

I have been promised the recipe for the gratin, and will post it as soon as I’ve had a chance to make it in my own kitchen. But here’s a sneak preview, which Blanc provided during the lunch: Peel, seed and boil a pumpkin and let the pulp drain overnight. Mash the flesh with a fork, add crème fraîche, egg yolks, grated comté, salt, pepper and nutmeg, and bake until golden. If you can’t find comté, you can use a similar cheese, for example gruyère. (At left, one of Blanc’s assistants with the gratin.)

As for the turkey, Blanc — a genial host, who at 70 has no plans to retire  — confided his secret method for ensuring that the dark meat is sufficiently roasted and the white meat doesn’t dry out: 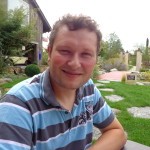 Roast the turkey until the white meat is done. Remove the bird from the oven. Carve off the legs and return them to the oven. Set the rest of the bird aside, covered to keep it warm. When the legs are fully roasted, return the white meat to the oven briefly to heat it up. Then carve and serve.
(At right, Cyril Lhotlain, the farmer who raised the turkey and one of Blanc’s guests at the Thanksgiving lunch).

Blanc actually served the white meat first, then brought the dark meat to the table at mid-meal. I will definitely try this method next time I roast a Thanksgiving turkey.

As for dessert, Blanc provided a choice of sweets from his menu, like the Paris-Bresse, his take on the more usual Paris-Brest, a cream puff with praline filling. The Arte program, in which I am also filmed making the cranberry sauce, will air on French TV in late November. I’ll give you the date — and hopefully some info on how to view the program on the web — as soon as they let me know.