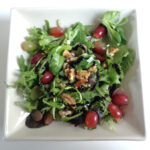 This is one of those French salads with an evocative name where the ingredients vary according to the whim of the chef. Salade vigneronne translates as ‘winemaker’s salad’, and in this version you’ll find tender leaves, walnuts, grapes and garlic in a balsamic vinaigrette, with optional add-ons such as smoked duck breast, dry-cured ham or croutons. It’s a salad I serve often in autumn. But when I surfed the web to see how others do it…

… I found that others tend to leave out the grapes. Instead they may use dandelion leaves and bacon; arugula, hard-boiled egg and onion; sausage, cheese and pickles (the Alsace version, with no greens)… So is my version truly a salade vigneronne? To my mind, definitely, as vigneronne, according to the Larousse Gastronomique, is a word associated in cuisine with ‘preparations having to do with grapes, the grapevine or autumn dishes’.

Other salads with a range of possible ingredients include salade parisienne, a bistro classic, and salade périgourdine, from the Dordogne region of southwest France. Let’s start with that one. I was thinking of posting a recipe for salade périgourdine this week but dropped the idea because the ingredients are too hard to find outside France. Such as gésiers de canard, or preserved duck giblets. If those aren’t available, one can use shredded confit de canard (preserved duck), foie gras (of duck or goose), dry-cured ham and/or pâté. Then one can add walnuts, croutons, green beans, cherry tomatoes, etc. The author Martin Walker’s recipe for a classic version can be found here.

As for salade parisienne, I’ve been thinking about posting this ‘Paris-style salad’ for quite some time, the problem being that no one can agree on what’s in it. It generally includes ham cubes and cheese (Gruyère, Comté, etc.) on a bed of Boston lettuce (laitue) with a mustard vinaigrette, but after that anything goes. Potatoes? Why not. Hard-boiled eggs? Tomatoes? Green beans? Perhaps. Sliced raw mushrooms? Although I’ve never encountered them in this salad, they feature in various recipes and are said to have given the salad its name — white mushrooms being known in French as ‘champignons de Paris‘. This is apparently because they were cultivated in an abandoned quarry at the southern edge of the city until 1895, when construction of the Paris Métro put an end to that. 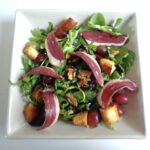 Getting back to salade vigneronne, my theory on why there are so many versions is that the name harks back to the tradition of winemakers serving hearty food to the workers they hire in autumn to pick their grapes. Although I’ve never participated in the vendanges (grape harvest), I hear it’s back-breaking work that deserves a substantial lunch. My lighter version of the salad may be served as a starter or as a lunch dish, followed perhaps by some cheese, and with a glass of red alongside. It would also make a nice dish to serve on the upcoming November holidays — Hanukah and Thanksgiving.

Meantime, as to what else I’ve been up to in the kitchen, I made a wedding cake this past week. Great fun!