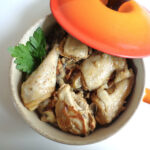 I was inspired to make this Normandy dish of chicken cooked in hard cider by the late great writer Marguerite Duras. Not that she made it for me, but I did enjoy meals at her house — more on that later. The dish originated as peasant fare for special occasions. The chicken is lightly browned, mushrooms, shallots and bacon are added, and the dish is then stewed in hard cider, with cream added at the end. By the way, Normandy grows a lot of apples.

I adapted the recipe from a slim cookbook called La cuisine de Marguerite (Benoît Jacob, 1999) that I was charmed to find at a local bookshop here in Paris a few years back. It features facsimile pages from the notebook where Marguerite Duras jotted down her recipes and photos of the author’s kitchen, and includes dishes like ‘Michèle Muller’s grandmother’s little pâtés for picnics at Saint Marguerite Island and walks by the sea‘.

I was charmed to find it because I have a long personal history with Marguerite Duras, although I never met her. I discovered her work in the summer of 1975, when I was a graduate student spending a year in Paris. She had recently published a book with the writer Xavière Gauthier called Les Parleuses, which translates as The Talkers, although the book is actually about writing — more specifically, about what it means to be a woman writer and how what women have to say and how they say it is different from men’s writing, which many not sound like anything special now but was very brave at the time.

I returned to Ithaca, immersed myself in Marguerite Duras and wrote my master’s thesis on some of her works. By the time I moved back to Paris, I’d had an overdose — I didn’t look at another of her books for years. But fate works in mysterious ways. Much later, after she died, I was introduced by a friend to her son. And one day he had a party at the home outside Paris where Marguerite Duras had lived. At that party, a friend of his from Italy who was staying there for a while asked me to dance. And then he invited me back.

So it was that, over one summer, I spent several magical evenings exchanging stories in the very kitchen where Marguerite Duras had once cooked poulette au cidre. It was in her lush garden that I discovered fresh sage, with its heady odor and wild, musty flavor — you’ll find it in many of the recipes on this site. She had a hammock in the garden, and her kitchen had a homey feel, with teacups hanging beneath a shelf and patterned tiles above the sink. Her garden and kitchen inspired me when, years later, I bought my cottage in Burgundy. I hope you’ll enjoy the dish as much as I do. And…