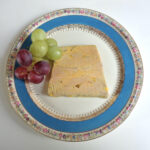 Let’s face it — foie gras is controversial. Beloved in France, where it is served as a special treat on festive occasions, it is shunned elsewhere by people who object to the force-feeding of geese or ducks to fatten their livers. Two years ago, the state of California actually banned foie gras, and this summer India followed suit. Other countries, among them England, have sought to find alternative methods of fattening the fowl. And yet this controversial food is not only considered one of the finest products of French gastronomy, it has ancient roots. Foie gras was enjoyed by early Egyptians, Greeks and Romans, and by East European Jews for whom the fat could replace butter. Its use spread from Hungary to the Urals before it made its way to France via Alsace a few hundred years ago.

Since then it has been joyously consumed by the French, the world champions in foie gras production. They serve it as an elegant canapé at cocktail hour, with Champagne or a chilled sweet white; on a salad of tender leaves and green beans (known here as salade folle, or crazy salad); or in large slices as a first course on Christmas or New Year’s Eve.

There is an art to serving foie gras that may appear obscure to the uninitiated but is actually quite simple: it has such star power that it needs no embellishing. Foie gras, as a canapé, should be served on its own. I was asked recently whether it could be accompanied by cheese and crackers. The answer, most emphatically, was ‘No!’ If you need to serve an assortment of canapés, choose something with equal star power, and serve it on a separate platter — red salmon caviar on buttered rounds of toast, for example.

Apart from Champagne, which adds a festive air to any occasion, the best wines to serve with foie gras are those from the region of southwest France where the duck and geese are raised. At cocktail hour, choose a chilled Monbazillac or Sauternes, sweet wines with a sublime flavor imbued by the use of grapes affected by ‘noble rot’, which increases the concentration of the grapes’ natural sweetness. If foie gras is served at the table, it marries well with sturdy reds like Bordeaux — or Monbazillac, or Champagne.

However you choose to serve it, foie gras will add an unmatchable gourmet touch to your occasion. And any occasion can be a fine one. It’s the end of summer? Vacation’s over, the kids are heading back to school, you’re back to reality? Perfect. Get out the foie gras.

I have included three ways of preparing foie gras on the recipe page that accompanies this post. Happy cooking!

This entry was posted in 1. Starters. Bookmark the permalink.