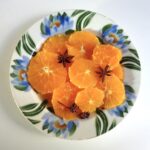 This light, refreshing dessert of orange slices in a flavorful syrup is best in winter, when large sweet oranges are in season. I first tasted it at the home of my neighbor Manuela, a superior cook. But on that occasion she barely cooked. The main course was a platter of oysters and langoustines straight from the market. She followed up with the sliced oranges, which were so delightful I had to have the recipe. The star ingredient was star anise.

You can use any any oranges for the dessert, but the plumper and sweeter the better. The syrup is infused with cinnamon, vanilla, cloves and star anise, which translates beautifully into French as badiane. For me, star anise conjures up visions of Asian beaches with palm trees swaying in the wind. I use it often in Chinese cooking. More on that later.

If you haven’t used star anise before, it’s a seed pod that comes in the shape of … a star. It has a flavor similar to fennel seed, and can be found at high-end food shops and Asian groceries. According to amusingly varying accounts, the star anise was brought Europe in the 1500s either by Marco Polo or by an English sailor. If you’ve ever had the Vietnamese soup pho, you will have encountered its flavor.

This I knew, but what I didn’t know is that apéritifs like pastis and ouzo also get their anise flavor from star anise. The seed is prized in Asia for its medicinal properties, while in Europe it is used to make spiced tea and spiced wine. In the recipe for the orange slices, the spices are filtered out at the end, but star anise is so pretty that I use if for decoration.

Now back to Chinese cooking. A secret little known outside my immediate circle is that I’ve been experimenting with Asian cuisine in recent years. It all started when my sister-in-law sent me a Thai cookbook one Christmas (New Thai Food by Martin Boetz). Once I’d assembled the basic ingredients, I found it was easy to produce delicious Thai food at home for a fraction of the cost of a meal at the local Thai place.

During lockdown I branched out to Sichuan cuisine, again inspired by a local joint. This is where star anise came into the picture, along with another spice I now use a lot, sichuan peppercorn. One favorite is a cucumber salad with peanuts, another is shredded chicken in a spicy sauce. Lately I’ve been having a go at Chinese dumplings, for example with ground pork, Sichuan peppercorn and other spices, or with shrimp and lemongrass. If you can find the wrapper dough at an Asian shop it’s, pardon the mixed metaphor, a piece of cake.

I’ve thought about posting some of these Chinese/Sichuan recipes here, but since this is a French cooking site I’ve hesitated. However, if you consider that the French love Asian cooking, and that Chinese, Vietnamese, Japanese and Korean restaurants are doing a booming trade in Paris, then maybe Asian recipes are fair game. If you have an appetite for the occasional Asian dish on this site, please let me know. And in the meantime…