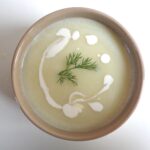 Hiding beneath its rather grand name, potage Parmentier is familiar to every child in France as potage poireaux-pommes de terre, or creamy leek-and-potato soup. It takes its name from Antoine Parmentier, who won royal approval of the potato (seriously!) on the eve of the revolution that toppled the kings of France. The soup — which unlike vichyssoise is served hot — makes a satisfying, and some would say elegant, winter dish.

The story of Parmentier The Man is amusing, so let’s start with him. The young Antoine trained as a chemist but, lacking the funds to open a pharmacy, he joined the army, which sent him to Hanover in 1757 during the Seven Years War. He discovered the potato upon being taken prisoner by the Prussians, who served their POWs potato soup.

The potato, an American import, was viewed with suspicion in northern France at the time, although it had been accepted in other parts of the country. Parmentier was so impressed by its qualities that he launched a campaign to promote it, stressing that it could help alleviate famine. After writing a thesis on the matter, he won an award from the Besançon Academy of Sciences — despite a parliamentary ban on cultivation of the potato (really!). His next step was to tackle the Paris Faculty of Medicine, which after many weeks of debate agreed in 1772 to allow him grow potatoes in Paris.

By 1786 he was ready to present the potato to King Louis XVI and Marie-Antoinette at Versailles. According to lore, the potatoes he brought them included some blossoms. The king plucked two — one for the queen, inserting it it into her powdered wig, and the other for himself as a boutonnière. He crowned that gesture by telling Parmentier, ‘France will thank you one day for discovering the bread of the poor’.

Preparation of potage Parmentier requires nothing more than potatoes, leeks, water, salt and a little cream. Some cooks include an onion as well. The veggies are pared, simmered to tenderness and puréed, with the cream swirled in at the end.

The soup makes a fine lunch dish and may also be served as the starter of a more elaborate meal. It is generally topped with fresh herbs, such as chives, dill or chervil. Or you can dress it up with a little salmon or trout roe on top — an elegant start to any meal.