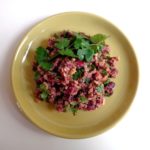 I first tasted this knock-your-socks-off red-bean-and-walnut salad in Moscow in 1984. Russia was still part of the Soviet Union, and young people from other parts of the empire still flocked to the capital to study or work. A friend introduced me to a Georgian woman who was studying particle physics. When she invited us over for dinner, I had no idea what to expect. Then she produced this fabulous dish. I’ve been making it ever since.

It took a long time for this salad, aka lobio, to make its way to Paris, but we can now enjoy it here in any number of Georgian restaurants. If you’ve never encountered Georgian food, you have a treat in store. The walnut-plus-garlic combination is the basis of many dishes, from chicken with walnut sauce to salads of green beans, beets, spinach, leeks etc. It’s both delicious and healthy, perhaps one of the reasons — along with their love of yogurt and natural wines — that Georgians are among the longest lived people on earth.

You can serve this salad as a starter or as part of a simple or elaborate lunch or dinner. It marries well with grilled meat, poultry or fish, and could also pair nicely in a vegetarian spread with, perhaps, spicy eggplant caviar, goat cheese pastries, herbal tomato salad, pomegranate salad, spinach quiche with pine nuts and parmesan, mesclun, watercress salad, salad of lamb’s lettuce and beets, or a simple green salad, French style (which, to my surprise, remains the most popular recipe on this site). I also serve it (more Soviet influence) paired with smoked salmon or red caviar on buttered toast. Try it and see.