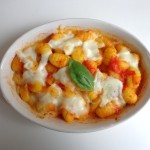 What could be more satisfying on a cool autumn evening than gnocchi enveloped in a rustic homemade tomato sauce, topped with mozzarella and baked in the oven? For an everyday chef, the beauty of this dish lies also in the ease of preparation: 15 minutes of cooking time, then pop it in the oven, and in 10 minutes more you’re done. A warming dish turned into a meal with the addition of a crisp green salad and a bottle of hearty red. Voilà.

Now here’s the question: are gnocchi French? The answer: no, and yes. The written history of these little dumplings made of potato and flour dates back to the 15th century, when the Florentine statesman Laurent de Médicis (Lorenzo il Magnifico) praised gnocchi in poems he wrote for the pre-Lenten carnival. Around that time, today’s French city of Nice was part of the House of Savoy, and thus part of Italy. The gnocchi served in Nice were called niocki (same sound, different spelling). In 1880, Emile Zola wrote about ‘nioky with parmesan’ in his novel Nana. It’s a dish with historic roots in both countries.

These days the French serve a dish called gnocchis à la parisienne in which the dumplings are made of cream-puff dough (pâte à choux) and baked in a Béchamel sauce. But the French also serve potato gnocchi, and in fact this recipe is inspired by a former little bistro down the street from me in Paris where the baked gnocchi were out of this world.

Meantime, Thanksgiving and Christmas are coming and, in honor of these occasions, I plan to post a French recipe for roast turkey next week. The recipe is inspired by my visit two years ago to the restaurant of the three-star chef Georges Blanc, who created his version of an American Thanksgiving. The turkey is stuffed with ground veal and pork, with walnuts and thyme instead of chestnuts and sage. Watch this space…