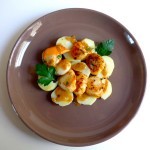 Sea scallops, Brittany style — dusted with flour, tenderly sauteed in butter and drizzled with a creamy sauce — make a fine winter’s dish. But what does this recipe have to do with the Way of Saint James, the historic pilgrimage route to Santiago de Compostela in northwestern Spain? Quite a lot, as it turns out, for the saint known as ‘Santiago’ in Spanish is ‘Saint Jacques’ in French, and along the route he gave his name to the humble scallop.

The reason — as I learned from the great chef Paul Bocuse, from whose recipe this one is adapted — is that scallops are so plentiful along the route to Santiago de Compostela, which follows the coast of Galicia in northern Spain, that they became the symbol of the pilgrims, hence coquilles Saint-Jacques in French. 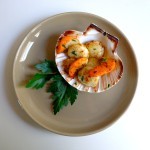 And why Brittany style? That’s a question I failed to answer, although my best guess is that scallops and butter are popular in the region. Brittany, of course, is surrounded by sea, and shellfish may be found there in abundance. The potato also has an important history in Brittany, where it came into wide use during a famine in the mid-18th century. In this recipe, the scallops may be paired with sliced potatoes, as shown in the photo above, or with potatoes boiled in their jackets. Another nice touch is to serve them in their shells.

And while we’re on the subject of linguistics, since when has French onion soup become a political issue? France is having a collective hissy fit over spelling changes — proposed more than 25 years ago by the Académie Française, the exalted guardian of the French language — that will be enacted this autumn in school books. Among the changes, the word oignon (pronounced oh-NYON) will lose its ‘i’, becoming ognon (pronounced exactly the same way). The idea is to make the spelling conform to pronunciation, although in some parts of France, for example my corner of Burgundy, people may still be heard using the former pronunciation (wa-NYON). Other changes involve making the circumflex accent (^) disappear on words like disparaître (‘disappear’).

The debate has become so heated that, in a column in last night’s Le Monde, the French education minister effectively accused four of her predecessors in the job of treason, declaring that the country’s republican values were at stake and that the former education ministers had betrayed those values by failing to enact the spelling changes over the last quarter century. Her point was that making the language easier to spell, and thus comprehend, was essential to the future of France’s children.

Personally I find the changes regrettable, for historic reasons. Even though they will be confined to textbooks for the moment and no one will be inserting spelling changes in Proust, they are bound to seep into general usage over time. Accents like the circumflex actually take the place of letters that have vanished over the centuries. Disparaître, for example, used to be spelled disparaistre — closer to the same word in English, and to the Latin root (disparescere). But the ‘s’ stopped being pronounced in French and, at some point in the last 1,000 years or so, it … disappeared.

So will this site change its recipes to conform to the new rules? Heck no. Soupe à l’oignon will remain French onion soup for the foreseeable.

This entry was posted in 5. Fish and Shellfish and tagged brittany style, coquilles saint-jacques, recette, recipe, scallops. Bookmark the permalink.