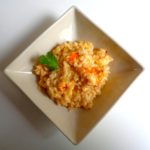 The lobster known as le homard — the one with alarming claws — is hugely expensive in Paris, and so is its kinder, gentler cousin, la langouste (no pinchers). But this winter frozen langouste tails began appearing at a reasonable price, so I brought some home and began to experiment. I served them French style, butterflied and grilled with a vermouth-flavored beurre blanc, on New Year’s Eve. And this week I tried my hand at lobster risotto.

It was fun, easy and delicious. The trick is to pre-cook the tails, pull out the meat and then use the shells to make a broth. After that, it’s a standard risotto. You sauté onions in olive oil, add the rice (preferably Arborio or Carnaroli rice from Italy), stir until it’s translucent, add some dry white wine and, when it evaporates, add the lobster broth. When the rice is nearly cooked to creamy perfection, you add the lobster, stir in some butter and — if you dare, some grated parmesan. This would be a travesty to most Italians, who prefer their seafood pasta and rice sans parmesan, but non-purists such as myself tend to like it.

The langouste is a warm water creature also known as spiny lobster, langusta or (really?) crayfish. It is plentiful in the Mediterranean, and was enjoyed by the ancient Greeks and probably far earlier residents of the area. Still considered a delicacy in France, it is most often served during the holiday season. But that should not deter us from enjoying it at other times of the year, particularly as the frozen variety is available year round. If you can afford it and do not fear being pinched, you can use the other type of lobster (homard) instead. Whichever, this risotto makes a sublime comfort food on cold winter nights.