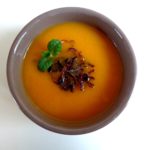 Butternut soup is suddenly the rage in Paris. Walk down any street and you will see it listed on menu-of-the-day chalkboards outside bistros. This is all the more surprising given that butternut squash was virtually unknown in France until a few years ago, when it began appearing in farmers’ markets. Having captured the national imagination, it also captured mine, and today I’m offering two versions of this pleasant winter soup.

The first, pictured above, uses Mediterranean flavors to liven up what is — let’s face it — rather a bland vegetable. The second, pictured below, imbues the squash with Thai flavors. Either can make a tasty start to a cold-weather meal, and both may hold special appeal for vegetarians and vegans, as well as omnivores like yours truly. 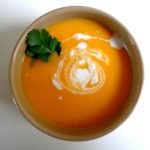 Perhaps in their (probably hopeless) effort to protect the language, the French have rebaptized what is originally a New World vegetable as courge doubeurre, which translates loosely as ‘sweet butter squash’. But I have never seen it marketed under that name, and you would most likely get a quizzical look if you asked at a grocery store for doubeurre. In fact, you might instead be given a packet of butter (du beurre). Better to use the French pronunciation of butternut — boo-tair-NOOT.

Meantime, on the literary front (French food and wine style), three books have come to my attention that may interest you. The first, The Lost Vintage by Ann Mah, will be out in June. She says it’s ‘a story about wine, World War II and family secrets that have been buried for generations’. The second, Burgundy: Twisted Roots by Janet Hubbard, is the third in a mystery series set in the wine regions of France. And finally, a reader of this site has alerted me to the forthcoming publication of Minced, Marinated, and Murdered, a gourmet crime mystery set in Lyon, with pre-order gifts attached.

But back to squash. Butternut is not only tasty but also packed with vitamins and minerals. Its texture makes it perfect for velouté, the French name for velvety soup. The recipes are easy and inexpensive, and the flavors comforting. So treat yourself!