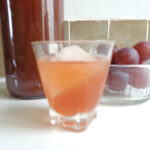 I discovered the apéritif known as ratafia one summer when the former owners of my cottage in Burgundy paid me a visit. As they admired the changes I’d made inside, I asked them how they had used the grapes growing on a sprawling vine outside. Since the grapes were too sour to eat, I had been leaving them to the birds. But I was sure that previous owners, including those who planted the grapevine in the first place, must have had a better idea.

‘We made ratafia!’ my visitors announced proudly. And they explained how to do it. Crush the grapes, filter the juice and add a glass of strong alcohol such as  marc de Bourgogne or grappa (in a pinch, you can use vodka). Let it sit in a dark place for three weeks, add some sugar and let it sit a week more. Refilter and funnel it into a bottle.

That autumn, when my sour grapes were ripe, I followed these instructions and a month later had a bottle of sweet fortified wine — homemade, and as natural as could be.

Ratafia is usually served chilled at cocktail hour. It can also accompany cured ham, foie gras, cheeses like blue or Roquefort, or dessert. It may be slightly murky, but that’s not a problem. The strong alcohol prevents fermentation, and it will keep for up to a year.

Ratafia is enjoyed across rural France and beyond, and is not always made from grapes. Quinces, raspberries, walnuts, cherry stones, even rose petals are used by home brewers. The word ratafia is said to derive from the Latin rata fiat, meaning ‘the accord is sealed’ — apparently a toast in years gone by. And indeed, ratafia is popular across a swath of land that was once Roman, from Italy to Switzerland, France and Catalonia. 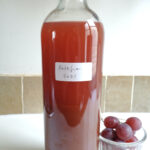 In Burgundy, where grapes are plentiful, making ratafia in the autumn is an annual pastime. And now that I’ve sold my cottage, I make it in Paris. It’s fun, inexpensive and the results are thoroughly enjoyable.