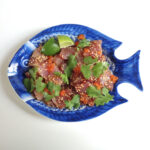 I was inspired to make a carpaccio of tuna the other day after lunching in Montmartre at a place that served a fabulous version infused with Asian flavors. I didn’t think to ask for the recipe, so I had to wing it. In this version, ultrafresh tuna is flavored with a marinade of lime zest, lime juice, sesame oil, ginger and soy sauce, and topped with toasted sesame seeds and cilantro. For a gala touch, I added a sprinkle of trout roe.

The restaurant, Che Tango, actually calls its dish ceviche of red tuna. So why, you may well wonder, am I calling mine carpaccio? Both involve raw fish — the difference is in how the fish is cut. In ceviche, which hails from Latin America, the fish is generally diced. In a fish carpaccio — a spinoff of Italy’s famous raw beef dish — it is served thinly sliced.

Carpaccio, which these days can involve meat, fish or veggies, takes its name from the 15th-century Venetian painter Vittore Carpaccio. The dish is said to have been invented in 1950 by Giuseppe Cipriano, the genial owner of the original Harry’s Bar in Venice, who wanted to please a client whose doctor had recommended she eat raw meat. He chose the name after visiting a Carpaccio retrospective that was on in Venice at the time — the color of the paper-thin raw beef resembled the vibrant reds in Carpaccio’s paintings.

With both beef and tuna carpaccio, there’s a trick to obtaining fine slices. Place the meat or fish in the freezer for ten minutes — this firms it up enough for easy slicing. You also, of course, need a very sharp knife, preferably sharpened just before slicing.

Vegetable carpaccios are a more recent entry to the repertoire. Most often seen in Paris is carpaccio de courgettes, in which thinly sliced raw zucchini is sprinkled with olive oil, salt and pepper, and topped with parmesan shavings. In a post on the differences between three raw food dishes — tartare, ceviche and carpaccio — the French chef Roberta Nacmias names carpaccio of porcini mushrooms (cèpes) as the king of veggie carpaccios. To the thinly sliced mushrooms, she says, ‘You add fine slices of white celery and white truffle. Then oil, salt and pepper, without forgetting to be generous with the parmesan’.

This set me wondering — are raw porcinis safe to eat? Research revealed that while many wild mushrooms are toxic when served raw, and some can be fatal, raw porcinis are merely difficult to digest. And indeed, the blogosphere has plenty of recipes for carpaccio de cèpes, often drizzled with hazelnut oil. Sounds great, but I’m not about to risk it.

As for tuna carpaccio, there’s no health risk as long as the fish is very fresh. It’s a light, flavorful dish that may be served on its own at lunchtime, perhaps followed by a green salad, or as the starter of a more elaborate meal. It would pair well with various Asian dishes on this site — Thai duck salad, Vietnamese noodle salad, cockles in satay sauce or lemongrass chicken — or with virtually any fish dish.

After writing this post, I called Che Tango to ask about their version of tuna carpaccio — and found that the recipe I came up with was quite similar. Their marinade is made of soy sauce, sesame oil, ginger, hot pepper, nuoc mam (Asian fish sauce) and garlic. And they, too, sprinkle the dish with toasted sesame seeds — white and black — and cilantro.

This entry was posted in 5. Fish and Shellfish and tagged carpaccio, ceviche, recette, recipe, thon, tuna. Bookmark the permalink.