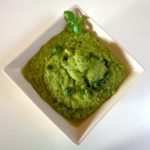 If you’ve ever grown zucchini, you’ll know that it goes forth and multiplies at this time of year, producing an overabundance at farmers markets. You’ve made ratatouille throughout the summer, tried your hand at tian or fried zucchini with garlic, and would like to attempt something new. May I suggest zucchini puréed with fresh basil, garlic and olive oil? An Everyday French Chef creation that scored plaudits in this household…

It takes only 15 minutes to make this dish, which can be served alongside just about anything. You steam the zucchini, purée it and then blend it with a sauce of fresh basil, garlic and olive oil. Add a little salt, grind in some fresh pepper, and you have a zesty, flavor-packed side dish ready to go straight to the table. And did I mention it’s light? This is comfort food without the calories, a perfect treat as summer heads into autumn.

I’ve always liked zucchini — but I have to say we had a major contest of wills in the summer of 2000, when I planted my first organic veggie garden at what was then my new country place in Burgundy. In late spring, I put in six baby zucchini plants that I’d bought at the farmers market in Toucy. They settled in nicely and, soon enough, began to produce opulent yellow flowers that turned into baby zucchini.

It was thrilling to pick the first ripe zucchini and cook it straight off the vine (hint: you can also eat baby zucchini raw, sliced thinly and sprinkled with sea salt and olive oil). But as the summer progressed, the plants went into overdrive. Suddenly I was drowning in zucchini. I couldn’t pick it fast enough, more and more kept coming, and soon I had giant marrows on my hands. What to do?

That summer I found myself making huge pots of zucchini soup, which I packed in plastic boxes and stored in the freezer. The soup would be nice to have around over the winter, I figured. Then one snowy weekend, when I was back in Paris, the electricity went out in the country. By the time I returned, the soup had melted and had to be thrown away. Sigh.

From then on, I put in only a couple of zucchini plants each year, and still had more than enough of this versatile vegetable to grace our table. And now that I no longer have a garden, I find myself gathering zucchini every Sunday at the market down the street in Paris. I whipped up this purée the other day and served it alongside pork that had been slowly roasted, surrounded by cherry tomatoes. A great summer meal.