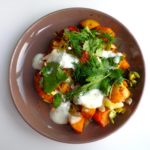 This dynamite dish of harissa-infused chicken, potatoes and leeks, topped with fresh herbs and a tangy yogurt sauce, is (full disclosure) not my original creation. I found it on the site of the uber food blogger David Lebovitz, who had himself adapted it from a cookbook by Melissa Clark. Reader, I tried it — and have made it many times since, to the delight of family and friends. As it is now part of my Paris repertoire, I wanted to share it with you.

If you’re not familiar with harissa, it’s a fiery North African chili-pepper paste that is most often seen in France served alongside couscous dishes. Generally imported from Tunisia, it comes in a colorful tube or small can and is readily available at supermarkets. In other parts of the world, you can order it online or make it yourself, for example using this recipe from the culinary web site Epicurious, which reprinted it with permission from the excellent Jerusalem: A Cookbook by Yotam Ottolenghi and Sami Tamimi.

This brings me to a question that arose when I first started out as a culinary blogger and discovered that other sites were ‘borrowing’ my recipes. Is this ethical, I wondered? Is it even legal? I got the answer at the Roger Smith Cookbook Conference in New York, which I attended back in 2013: There is no copyright on recipes. Anyone can use and share them. It does seem fair, however, to credit the authors. You can find David Lebovitz’s version of this dish here. He includes a link to Melissa Clark’s Dinner: Changing the Game.

My version is slightly different from theirs, notably in that it uses deboned chicken. It is quite easy to make. You immerse the chicken in a sauce of harissa, olive oil, cumin, salt and pepper, add the potatoes, and let it all marinate for a while. Pop it into the oven and, when it’s half-cooked, scatter thinly sliced leeks over the top and pop it back in. About a minute later, the captivating aroma of roasting leeks will come wafting from your kitchen. If anyone’s home, you’ll find them clamouring to know when dinner will be ready.

By the way, I wasn’t planning on posting this recipe this week — the weather made me do it. We in Paris are just emerging from our third brutal heatwave of the summer, and when the mercury goes up I find myself longing for spicy food. Have you noticed that the world’s spiciest cuisines come from hot places? Think India, Mexico, Thailand, Mali, Szechuan… Why is that? Will look forward to your answers. And…

This entry was posted in 6. Poultry and tagged chicken, harissa, poulet, recette, recipe. Bookmark the permalink.