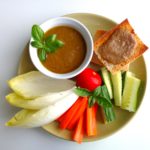 ‘Cauchemar en cuisine’ is a popular French TV show starring a celebrity chef: it translates as ‘Nightmare in the kitchen’, which pretty much defines the situation over here for the last couple of weeks. In a word (well, two), no water. But limits can spark creativity. I needed to make something quick and easy for the blog this week. And so I offer you anchoïade, a zingy anchovy-based dip from Provence that can be whipped up in minutes.

Like it’s cousin, olive-based tapenade, anchoïade is often served on toast at l’heure de l’apéritif (cocktail hour). In Provence, this often involves chilled rosé, pastis, or the musky sweet wine Muscat. But unlike tapenade, which is rarely surrounded by veggies, anchoïade may also be served as the star of a colorful first course. And making it is child’s play. You simply combine anchovy fillets, garlic and olive oil in a blender. Pulse, and it’s done.

Now back to my nightmare in the kitchen, which has actually been going on since June when a salesman at Picard, the excellent French frozen food chain, advised me to use a hair dryer to defrost my freezer. Which I did. After which the freezer died, along with the fridge unit on top.

As you may remember, we had a couple of fierce heatwaves in Paris this summer. With everything melting, I called Darty, the excellent French houseware store, and ordered a new refrigerator-freezer, of  ‘exactly the same dimensions’ as the previous one. They delivered it the next day. Alas, it was 1 centimeter too tall for the available space. Never mind — they plugged it in, shoved it in as far as it would go, and departed. Fine.

Except that the next time I ran the dishwasher, which sits beside the fridge, it caught fire! Another call to Darty, and a new dishwasher was on the way, along with a substitute (shorter) new fridge. In the meantime, as it appeared the powerful first new fridge had shorted out the electrical circuit accommodating both appliances, I called an electrician to get a new circuit installed.

About a week and 800 euros later, everything was working again. Fine. But this month the nightmare resumed when my downstairs neighbor informed me that his bathroom had sprung a leak from the ceiling, which sits under my kitchen. There were no visible leaks up here. A plumber was called. He deduced that the leak was coming from beneath my pink-tiled kitchen floor. Next thing I knew, he’d removed the cupboard beneath the sink and was busting through the lovely tiles with a jackhammer.

He found a leak in a drainpipe, repaired it, filled in the hole with cement, told me the problem was solved and departed. This was on a Friday evening. Two hours later, my neighbor called to say his ceiling was still leaking. It turned out the plumber, who had the keys to my neighbor’s place, had cemented the pipe without checking to see whether the leak was actually fixed! When I called the plumber to ask him to come back and finish the job, he didn’t answer the phone. Until Monday.

It took another major round of jack-hammering through my kitchen tiles before the leakage was finally stopped, for the tidy sum of 3600 euros. We had been without water for … nine days. The moral of this story? It helps to have friends living across the street who are willing to lend you their shower. And take-out can be great.

This entry was posted in 1. Starters. Bookmark the permalink.