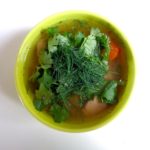 The subtle flavors of lamb, barley, carrots and gentle spices combine to make a soup that is both satisfying and light, perfect for taking the chill off now that cooler days are arriving at last. Topped with fresh cilantro and dill, with a touch of lemon juice and cinnamon for zest, it evokes the exotic tastes of Central Asian cuisine. I concocted it at lunchtime one gray day this week — a welcome change from the sweltering weather of July.

Barley is rarely used in French cuisine these days, although it has been cultivated here for centuries. One of the world’s oldest staples, having arisen 15,000 years ago in the Middle East, it was most commonly used in medieval France as flour, combined with rye flour, in a rustic bread consumed by peasants, white bread being reserved for the gentry. Barley is still widely grown here — it’s the third most commonly farmed grain in France — but it is mainly used in the production of beer. Nonetheless, it has a wonderful flavor and is highly nutricious, a welcome addition to soup.

In this recipe, lean lamb is used as the base for a broth simmered with onion, carrots, coriander seeds, bay and two kinds of pepper. The barley is cooked separately. Before serving, the lamb and carrots are cut into thin slices and returned to the strained broth, along with cinnamon and a dash of lemon. The fresh herbs are added on top.

The soup is hearty enough to be a meal in itself, accompanied by a sturdy red wine, some crusty bread and perhaps a mesclun salad. For a more elaborate late summer meal, you could begin with spicy eggplant caviar or goat cheese pastries, and follow with assorted cheeses and fruit, or a fruity dessert like caramelized pears or plum tart.

This entry was posted in 2. Soups. Bookmark the permalink.