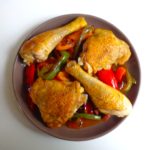 The Basque country of southwest France is much appreciated for its culinary contributions. Across the Pyrenees in Spain, three-star chefs have taken regional cuisine to new heights of refinement. In France, Basque cooking retains its earthy traditions. The dish known as poulet basquaise sets grilled chicken on top of sautéed sweet peppers, tomatoes, onions and garlic, with a hint of spice. The result is a rustic, satisfying dish.

This is country fare, and there are as many versions as there are households nestled amid the mountains. Sometimes cubes of dry-cured country ham are added, sometimes not. The dish is often flavored with piment d’Espelette, made from mild local red peppers. But whatever the version, the dish is based on piperade — the sautéed pepper-tomato combo. 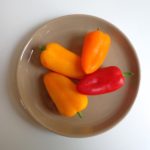 Peppers are popular throughout the southwest, and come in many varieties, from mild to searingly hot. They are often smaller and thinner than bell peppers. I found some Basque-style peppers at my local market last weekend when shopping for ingredients. They were red, yellow and orange. I added a green bell pepper to achieve the right color combination.

When I served the dish to a couple of friends on Tuesday, a question arose. Why is the dish called poulet basquaise when poulet (chicken) is a masculine word in French, while basquaise is feminine? The answer is that usage has elided the words à la, meaning ‘in the style of.’ The same is true of boeuf bourguinon, and probably many other dishes.

As we enjoyed the dish indoors, there was a raucous tumult outside, for June 21 in Paris marks not just the solstice but also the annual Fête de la Musique, when people pour into the streets to hear the performance of anyone with a microphone and enough nerve. A woman  in front of the pizzeria across the street was giving voice to a barely recognizable version of Lucy in the Sky With Diamonds. The crowd started dancing. Noisy, but fun.

We had started our meal with melon and Bayonne cured ham, and planned to finish with strawberries but had to stop. Poulet basquaise, typically served with rice, is quite filling, and we had had enough of everything but wine.

That was Tuesday. Now it’s Friday morning and Britain has voted to leave the European Union. The result is a terrible shock for those of us who believe that the EU, despite its unwieldiness and questionable political decisions, has been a bulwark against the kind of European divisions that led to the second World War. Already we are seeing a domino effect, with rightist populist leaders in France and Holland calling for similar referendums.

My feeling — and this is beyond the usual scope of this blog, so if you are not interested in politics, please don’t read on — is that EU leaders erred badly a) when they opened the union’s borders to citizens of member countries whose poor flooded into richer lands, creating national identity crises, and b) by allowing unelected European policy makers to make decisions affecting national budgets for unrepresented populations, creating resentment over loss of national sovereignty.

I was up much of the night following the British election returns. Until 3 in the morning, the BBC was still running polls predicting a solid victory for the Remain camp. By 6, it was clear that those who chose to Leave had won by more than a million votes. Wishful thinking on the part of the pollsters? Who knows? It is a gray dawn over here.

And on that note, happy cooking.