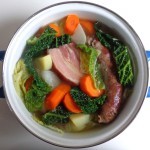 Now that the festivities are behind us, it’s time to get back to simple everyday food. Like this hearty dish from the Auvergne region of central France. Known as potée — literally, a potful — it combines winter vegetables with sausage and bacon to make a satisfying one-dish meal. Enjoyed fireside with a glass of good red, it will help fend off the January cold.

You will need only a green salad and wedge of cheese to complete your meal — perhaps some Cantal, which hails from the Auvergne region. (If you have never encountered Cantal, it is slightly crumbly like aged Cheddar but with a different taste.) Or a wedge of bleu cheese, another Auvergne speciality.

The region, which sits right in the center of the southern half of France, is rugged and mountainous, dotted with extinct volcanoes known in French as puys. Sparsely populated today, it has been inhabited for 15,000 years and was home to Gallic kings like Vercingétorix until Julius Caesar conquered Gaul in 52 B.C. The Auvergne also has the dubious distinction of having housed the collaborationist government of Philippe Pétain at the city of Vichy during France’s occupation by the Nazis in World War II.

But what has all this to do with food? I love the cuisine of Auvergne for its frank simplicity and its peasant roots. It is an earthy cuisine with plenty of character, as shown for example in the dish called aligot, a zingy blend of mashed potatoes, young Cantal and garlic (a family favorite). Auvergne is also renowned for its cured sausage and ham, and beyond la potée many other dishes feature cabbage, including a local recipe for stuffed cabbages that I plan to feature here one day or another.

So, on that note, here’s wishing you all a simple, earthy and delicious new year. Happy cooking!