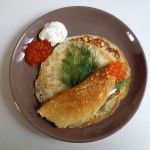 When I first moved to Russia in June 1986, black caviar was not only plentiful and cheap, but also — less than two months after the Chernobyl nuclear disaster — seemed (to me) to be one of the safest foods around. Would radiation have had time to penetrate the Caspian Sea, home of the sturgeon? I thought not, and indulged as often as possible in the luscious black roe. On toast for breakfast most days and, on special occasions, with blini.

Blini being the wonderfully fluffy and yeasty pancakes that have spread from Russia to Paris and beyond. Served on festive occasions, they make a dazzling start to a meal.

These days the sturgeon is an endangered species, so I top my blini with red caviar or smoked salmon instead, or sometimes just with cream and herbs. Which doesn’t change the fabulous quality of the blini themselves. Unlike the kind one finds in supermarkets these days — which often resemble cardboard — homemade blini are light as a feather. They are fun to make, although to be honest it’s a bit of a production and I usually make them just once a year, during the holiday season.

So, dear readers, here’s wishing you joyous festivities this December and a spectacularly happy start to the New Year. The Everyday French Chef will be on vacation next week, back with new recipes on January 2. If you’re looking for holiday meal suggestions, please check out the Holiday Menus page here. I think that cooking wonderful meals for family and friends is one of the truest forms of love. Let’s hope there’s plenty of that going around as we see out 2014 and ring in 2015. The world needs it, and so do we all.

This entry was posted in 1. Starters and tagged blini, caviar, holidays, pancakes, recipe. Bookmark the permalink.