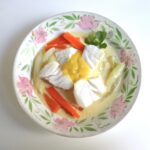 Bourride is a Mediterranean fish dish bathed in a sauce infused with garlic and inflected with hints of orange and sunshine. If you’ve been to the French Riviera you may have had the luck to encounter it. Elsewhere there’s little chance you would have run into this undeservedly lesser known cousin of bouillabaisse. I’ve rarely seen it in restaurants in Paris. Which is why, shortly after tasting it for the first time, I learned how to make it.

The star of bourride is aïoli, aka garlic mayonnaise. Unlike a normal mayonnaise, aïoli consists only of egg yolks, garlic and olive oil — no mustard, no lemon juice. The first step in making the dish is to create a fragrant broth that includes a strip of dried orange peel. While the broth is cooking, you make the aïoli and cut up some veggies — carrots and finocchio — as well as the fish. But which fish?

There are probably as many recipes for bourride as there are chefs in Provence. Some use monkfish (lotte), which has the considerable advantage of holding together nicely when it is boiled. But any firm, white-fleshed fish may be used. In the photo above, I used cod.

To complete the dish, the veggies are sautéed in olive oil, simmered until nearly tender in the broth, and then the fish is added. Aïoli is swirled in at the end, with an extra yolk added to thicken the sauce. Serve and prepare for applause.

Because of the delicate chemistry of the sauce, bourride must be served immediately upon preparation. Which raises the question of what to serve as a first course. My recommendation would be to offer hors d’oeuvres during cocktail hour — something that may be eaten before moving to the table, like parmesan apéritif chips, a savory cake with walnuts and roquefort or chicken liver pâté on toast. Then, while your guests are enjoying themselves, you can disappear to the kitchen and finish the dish.

Following up, you could serve a salad of tender leaves (mesclun), with cheese during or after, and a fruity dessert, for example poires au caramel (caramelized pears). And a good bourride deserves a good wine, from the region if possible, such as a chilled white from Cassis or  rosé from Bandol. Bon appétit! And…

This entry was posted in 5. Fish and Shellfish and tagged aioli, bourride, fish, recette, recipe. Bookmark the permalink.