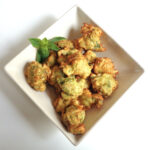 These light and crispy zucchini fritters are a French adaptation of a dish I discovered on a Greek island. Flavored with mint, dill, oregano and grated onion, they make a delightful start to a meal and may also be served at cocktail hour or as part of a mezze spread. Or you can serve them alongside grilled fish, meat, chicken or veggies. They marry extremely well with tzadziki. Add a bottle of chilled rosé, and you’ll feel like you’re in the Cyclades.

How I came up with the recipe is a tale that deserves to be told. In late May, armed with a vaccination certificate, I flew with a friend from Paris to Athens and took a ferry to Aegina, just over an hour away. The owner of our small hotel directed us to a beachside restaurant that he described as one of the best in town. We weren’t disappointed. (I didn’t take a photo, but if you ever get to Aegina the restaurant is called Taverna Floisvos.)

On our first visit we tried the calamari fritti, with an absolutely delicious Greek salad alongside. On our next visit my friend, Danielle, ordered what the menu called zucchini balls. That didn’t sound terribly appealing, and when they appeared they looked like flattened golf balls. But when I tried one I was amazed — so flavorful, so light! I dallied as the others at our table headed back to the beach, and when the waiter came by I asked for the recipe. Looking bemused, he summoned the owner, who also happened to be the chef.

A good looking Zorba-like man with weathered skin and a guarded smile, the chef/owner eyed me suspiciously at first but warmed up when I got out my phone and showed him this blog. It turned out he’d spent some time in Philadelphia and had little trouble communicating in English. But he was not particularly eager to share his culinary secrets. In fact, when I asked about the ingredients, he demanded that I guess.

Zucchini? Yes, of course. Onion? Yes. The herbs? That was trickier, but between French and Italian I managed to work out what he was trying to say (in Greek). Then came the surprise. Eggs? Absolutely not, he said. No eggs. Just flour, baking powder, salt and pepper. And as for the quantities, he was frustratingly vague.

Nonetheless, when I got back to Paris, I decided to give it a try — encouraged by Danielle, who insisted she had to have more. I decided to experiment on my own before inviting her over. This was a good move, as my first effort proved less than a triumph. The fritters were crisp on the outside but doughy within. Heavy, not light. To my mind, a beaten egg white was essential. So I went online to check my instincts.

It turned out there’s a name for Greek zucchini balls, and it’s a bit of a mouthful: kolokithokeftedes. I looked at various recipes, all of which called for both feta and … eggs. Then I checked some French recipes for beignets de courgettes.

Now, the word beignets covers a wide range of foods in France. They can can be sweet or savory, as long as they’re deep-fried. On its own, beignets means doughnuts, which come without a hole over here. Then there are beignets d’aubergine (eggplant fritters), beignets de crevettes (French-fried shrimp), beignets de fleurs de courgettes (fried zucchini flowers, fabulous), etc. The batter almost always includes eggs. 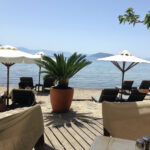 So, on my second try with the zucchini fritters, I went with my instinct and folded a beaten egg white into the batter. Success! I made myself some tzadziki (see the bottom of the recipe for tips on how to do this) and had the fritters for lunch. It felt like being back at the beach (at right, a view from the terrace at Marathonas beach, down the road from Aegina town).

Now I just need to invite Danielle over to try some.