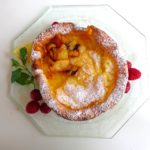 Is it an omelet? Is it a soufflé? It’s both! Although more like an airy omelet that rises and browns delightfully in the oven to make a perfect brunch dish. This specialty of Alsace is generally served sweetened with powdered sugar and lemon, with caramelized pear or apple slices, with fresh fruit — or any of the above. Breakfast meats like bacon, ham or sausage also pair nicely. 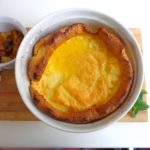 And the beauty of this dish is that it’s incredibly easy to make. Children can do it. Eggs are whisked with flour, milk and a little salt, butter is melted in a soufflé dish or high-sided cake pan, the batter poured in and — presto! — after 2o minutes in the oven, it’s ready. While it is baking, you can sauté some apple or pear slices in butter, adding a little sugar at the end to caramelize. 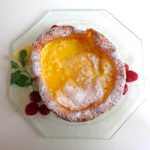 I have been enjoying this dish since childhood, thanks to my Grandma Hilda, who passed the recipe along to my mother. Hilda had no Alsatian ancestry as far as I know, but her husband, my Grandpa Herb, did. According to family lore, one of his second cousins, Nettie Harris Hirsch, inherited two pewter plates made in Alsace in the 1700s and inscribed ‘Be Kosher’ in Yiddish. 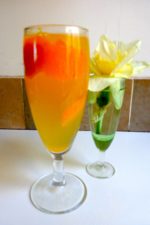 As it is currently Passover, this particular omelet, which contains flour, cannot be enjoyed by anyone who wishes to keep kosher. But Passover ends on Thursday evening, and in the meantime there’s Easter. So for a fabulous Easter brunch, mix up some mimosas, set them to chill and whip up an omelet soufflé.