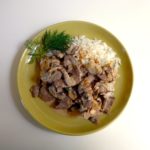 The origins of beef Stroganoff are murky but the consensus seems to be that a French chef had something to do with it. I therefore offer you my version of this classic dish of thinly sliced beef and mushrooms in a tangy cream sauce. I was inspired to make it recently after a visiting Russian friend, to my great surprise, asked for the recipe. Further inspiration came from an expert on Russian cuisine who is in Paris doing research for a new book.

Anya von Bremzen is co-author of the fabulous cookbook Please to the Table (Workman Publishing, 1990), a treasury of dishes from the 15 former Soviet republics (although they weren’t yet former at the time of publication). As there is some considerable debate over the origins of beef Stroganoff, I asked her for her opinion over lunch last week. She suggested that it was it was likely the creation of a French chef working for a noble household in Russia, noting the influence in the 19th century of Antonin Carême.

‘Carême was the first celebrity chef,’ Anya told me. ‘Alexander I took him to Russia, where he was a chef in the court of the tsars. It was his idea to start naming dishes after the nobility.’ So far, so good. It is, however, uncertain which member of the Stroganoff family inspired the naming of the dish.

The French culinary bible Larousse Gastronomique attributes the dish to a chef named Charles Brière, ‘who was working in Saint Petersburg when he submitted the recipe to L’Art Culinaire in 1891’, according to John Mariani, author of an article on the subject in the magazine Restaurant Hospitality. However, he adds, the dish appears to be older.

Indeed. The first known mention of beef Stroganoff appears in an 1871 Russian cookbook called A Gift to Young Housewives, which I happen to have in a re-edition bestowed on me by a dear Russian friend as I was leaving Moscow in 1994. The recipe, titled ‘Beef stroganovsky with mustard’, says nothing about the origins of the dish. It is amusingly different from current versions as it calls for cutting the beef into cubes, not strips, and tenderizing the steak for two hours in … allspice (not used these days).

Anya von Bremzen’s recipe in Please to the Table is a classic current version of the dish, using beef stock and flour to thicken the sauce as well as two kinds of cream (sour cream and heavy cream). She describes the dish as ‘indulgent and restrained at once’ and suggests using filet mignon, and wild mushrooms if available.

I’m afraid my version is less classic but it has the advantage, for the everyday French chef, of being both less expensive and quicker. And after just 20 minutes in the kitchen, you can bring the dish to the table and prepare for applause.