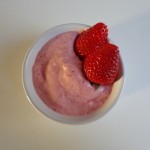 Who would have thought that something like strawberry mousse could spark a sex war? But that’s what happened the other day when, experimenting with this recipe, I took two versions of it to a friend’s place for a lunchtime dessert. There were six at the table — four women and two men — and a truly Parisian cacophony erupted when I asked which version they preferred. All of the women liked the first, in which the uncooked strawberries release a bright burst of flavor. All of the men preferred the second, creamier sort, in which the strawberries are briefly simmered before being incorporated into a mousse.

Of course we’ve all seen the way the pleasures of the table can be appreciated differently by women and men. Pardon the generalities, but I’ve found that women like their coffee brulant, as they say in French — burning hot — while men prefer to let it cool down a bit. Women often have more of a sweet tooth. Men like to take their sugar via alcohol. Et cetera et cetera. (If you have other examples, please share them.) In this case, I was very surprised by the outcome — but pleased that everyone liked both versions. It was a matter of degree, but all agreed that strawberry mousse — elegant, light and oh so flavorful — is a perfect dessert for spring. And by the way, preparation is simple and incredibly quick.

Site news: If you have a moment, please check out a site called Provence Guru, which as of this week will from time to time be featuring recipes from The Everyday French Chef. It’s not a food site per se, but rather an ‘insider’s guide to Provence,’ with articles on restaurants, culture, wine, rentals and many other themes. Run by a genial Englishman named Jamie Ivey who left his job as a corporate lawyer to enjoy a more relaxed life in Provence, and who became an author specializing in rosé wine in the process, it is packed with useful information about that particularly beloved corner of France.

Even if you’re not heading that way, you can enjoy dreaming about it. And in the meantime, happy cooking!

This entry was posted in Desserts and tagged dessert, fraises, mousse, recipe, strawberries. Bookmark the permalink.