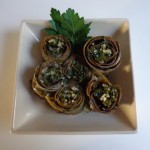 Artichokes simmered lovingly with garlic and parsley — this dish is served throughout southeast France and Italy, and probably has been since Roman times. There are many variations, often with pancetta, breadcrumbs, tomatoes, onions, carrots or white wine. I prefer the simplest Provençal variety — no bacon, no wine, just trimmed artichokes, olive oil, garlic and parsley. It’s good, earthy peasant fare and, for me, a rite of spring.

But what, you may well ask, is meant by barigoule? I had the same question. As it turns out, it’s a Provençal word for a kind of mushroom found on the roots of a thistle-like plant, field eryngo, that grows wild in the region. This mushroom — aka the king oyster mushroom, among other names — was chopped and used in a stuffing for artichokes. That practice has fallen by the wayside, but the word continues to be used to describe a method of preparation in which the artichokes are trimmed, their chokes removed and the centers stuffed with whatever.

The first of two culinary sources — Andrée Maureau, author of Recettes en Provence — remarks that the barigoule, or bérigoule, mushroom lent its name to a flat straw hat worn in the Arles region more than 200 years ago, before the French Revolution of 1789. She gives two ways of preparing artichauts à la barigoule — one, with just parsley and garlic, from the Lourmarin area north of Aix-en-Provence, and the other, with onions, garlic and tomatoes but no parsley, from the Alpilles mountain region further west.

My second source is Corinne Patin, whose web site, Le Festin de Corinne (Corinne’s Feast), is worth a look by anyone interested in Provençal cuisine. She says that peasants in the region originally cooked their artichokes in the same way as they cooked the mushrooms — grilled with salt, pepper and olive oil. Only later did they begin braising artichokes stuffed with chopped barigoule mushrooms, various herbs and salt pork.

I had similar dish a little more than a year ago in Sicily, where my friend Gisella, a superlative cook, prepared carciofi trifolati as part of her Christmas Eve feast. The artichokes were not stuffed but rather trimmed, sliced and simmered with garlic and parsley for what seemed an eternity. The result was a sultry, smoky dish to die for.