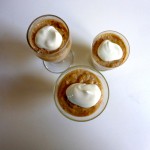 For an original winter dessert that’s fun to make, why not try your hand at chestnut mousse? Preparation time is reduced by using canned or frozen chestnuts. The chestnuts are boiled until tender and then puréed. You mix the purée with beaten egg whites with the yolks folded in. Whip some cream and fold it in, add a couple of adult ingredients, and voilà — a mousse with an edge. Serve it topped with cream or Greek yogurt, and you’ve got a winner.

But now that you’ve prepared your mousse, how to serve it? I would never have asked myself this question if I’d not had the privilege of attending a major French powwow on food last Friday. The occasion was the the Rencontres François Rabelais, a gathering of foodies from all horizons that is held in Tours, a noble city on the Loire. This year’s president was Olivier Roellinger, a celebrated chef who sent shockwaves through the French world of gastronomy in 2008 when he decided to turn in his three Michelin stars — the highest accolade — in order to devote himself to a new calling.

This year’s theme was hospitality (recevoir in French), and in his opening speech Monsieur Roellinger, a genial man, amused the audience by saying that the essence of recevoir (receiving) was donner (giving). We should all keep that in mind over the holiday season. But getting back to how to serve…

I took part in a round table on hospitality in various cultures at which one of the panelists, Galina Kabakova, spoke about traditions in Russia dating back to the time of the tsars. This is where I learned for the first time that there is something called service à la russe (Russian-style service): each guest’s plate is brought to the table with the food already on it. Just as we are generally served in restaurants today. Turns out it’s Russian. Who knew?

This contrasts with service à la française, in which guests are seated before empty plates. A serving dish is brought to each guest’s left side and the guests help themselves. Of course the English do it differently. With service à l’anglaise, the serving dish is brought to the guest’s left side and guests are served by the waiter or hostess. (Hope I got this right…).

At many of my own dinner parties, all the main dishes are set on the table and passed for guests to help themselves. We could call this service à la Meg, but in fact the French have a term for it: à la bonne franquette. This term, which does not translate readily into English, has a warm connotation. It derives from the word franc (also at the root of France), meaning frank or straightforward, and harks back to an earlier day, when French country people would gather around a table and share a simple meal. Happily, many French families continue to dine this way — together, and not separately in front of the TV.

How to serve the chestnut mousse? A la bonne franquette or however you like, as long as you’re with friends and family to enjoy it.