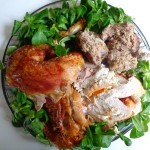 It’s the time of year when roast turkey appears on many holiday menus, including in France, where a meat stuffing is often used. Two years ago, I had the pleasure of traveling to Vonnas, north of Lyon, to attend a French version of a Thanksgiving dinner prepared by the three-star chef Georges Blanc. He stuffed his turkey with a mixture of ground pork and veal studded with walnuts and seasoned with thyme. It was fantastic.

Monsieur Blanc is not only a fabulous chef, he’s an amiable fellow who gladly shared some tips for how to prepare a turkey his way. One of the notable differences from the typical American turkey is that the French birds are generally younger and smaller, hence more tender. Georges Blanc used a dinde de Bresse, a turkey raised in the Bresse region east of Macon. Poultry from this area is the most highly regarded by French gastronomes. The birds are fed with corn and have an unmatchable flavor. While they are available in Paris, they are out of the price range of most mortals. I used a less expensive free-range bird when I made the turkey in the photo above, and it was nearly just as delicious.

If you’d like to try doing it the French way this year, for Thanksgiving, Christmas or another occasion, be forewarned — the stuffing is practically a meal in itself. Georges Blanc served his turkey and stuffing with roasted figs, pan-seared porcini mushrooms and a pumpkin gratin to die for. The recipe for the gratin is here, and tips for roasting the figs are included in this week’s recipe.

Here’s wishing you a joyful and peaceful holiday season. And…