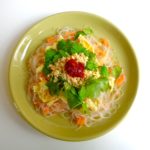 One day many years ago a friend took me to a tiny Vietnamese restaurant here in Paris where we were served the best Vietnamese food I’ve ever had outside Vietnam. Our starter was a tangy salad of glass noodles, carrots, shredded omelet, cilantro, crushed peanuts and hot sauce — and it knocked my socks off. I’ve gone back many times for that salad. And today, thanks to Madame Duong, who owns the place, I’d like to share the recipe.

The restaurant is Minh Chau, located on a narrow street behind the BHV department store in the heart of Paris. It’s a hole-in-the-wall where diners sit elbow to elbow, and it’s always jammed. Part of its popularity is the price — a full meal will set you back about 10 euros. The other part, and the main part in my opinion, is the quality of the food.

Starters also include Vietnamese standards — fresh spring rolls and fried nems (eggrolls) — but the star is the salade maison, in which the translucent noodles and shredded carrots are bathed in a slightly salty, slightly sweet, slightly sour sauce. I’d tried making it at home on occasion, with uneven results. I knew it contained salty fish sauce and sugar, and added lime juice for a hint of sour. It was good, but it wasn’t exactly right.

Madame Duong, a congenial woman who took over the family restaurant from her mother a few years back, was kind enough to share her secret: before being added to the noodles, the carrots are marinated in rice vinegar and sugar. No lime juice. I made it her way, and voilà — a perfect starter for a hot spring day.

Another key to the salad is the noodles — glass noodles, aka cellophane noodles, aka bean thread vermicelli — which made of mung bean starch. It’s worth seeking these out, as you wouldn’t get the same effect with rice noodles. If you can’t find them at an Asian shop in your neighborhood, they can easily be ordered online.

As a main course at Minh Chau, I generally order the lemongrass-flavored grilled chicken, which is crispy, juicy and delicious. I’d like to share that recipe with you at some point in the future, as well as the recipe for their sublime sliced bananas in coconut cream, the best dessert on the menu. And I’ve been experimenting with spring rolls, too.

In the meantime, if you’d like to make the noodle salad as a starter to an Asian-inspired meal, various dishes already on this site could follow it up nicely: pho, the popular Vietnamese beef-noodle soup; Thai-style chicken with lemongrass, cooked in a coconut milk sauce; or cockles in satay sauce, a French-Asian fusion dish.

For the record, France and Vietnam have a shared culinary heritage that dates back to the French colonial period. Ingredients imported from France, such as onions and beef, were incorporated into Vietnamese dishes, pho being a notable example, and successive waves of Vietnamese emigrants brought their cuisine with them to France, which now counts the world’s third-largest Vietnamese population, after Vietnam and the United States.

The many Vietnamese restaurants in Paris — the city’s telephone directory has 200 listings — range from formica-table joints to white-tablecloth luxury. All serve dishes that are fresh, light and flavor packed. Of the former category, my vote goes to Minh Chau.