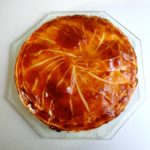 One of the charming traditions of France is the annual gathering of friends and family in early January to share the cake known as galette des rois, or kings cake — frangipane-filled puff pastry with a dried bean or token hidden inside to designate who will be king or queen for the day. The tradition marks the Jan. 6 Christian holiday of Epiphany, celebrated to commemorate the visit of the magi — the three kings of Orient — to the newborn Jesus.

But these days the galette is enjoyed by people of all faiths over a period stretching from Christmas to beyond the new year. It’s an occasion to raise another holiday glass — often Champagne for the grownups, apple juice for the kids. In a practice known as ‘drawing kings’ (tirer les rois), the youngest child present sits under the table and announces who will get each piece as the cake is cut. Whoever gets the fève — formerly a dried bean, now usually a small porcelaine token — wears a paper crown and names his queen or her king.

The popularity of this tradition can be seen in a 2014 survey showing that 97% of the French consume at least one slice of galette des rois each year (and that 9% do so five times!). This comes at a cost, however. Parisian bakeries can charge upwards of 30 euros for a cake for six people — a lot to pay, even though the galette will come with a collectible porcelain token concealed inside and a paper crown tucked into the box.

So I decided this year to experiment, and found that making a galette des rois at home is both simple and fun, especially if you use commerical puff pastry. The frangipane filling is made with powdered almonds, butter, sugar, eggs and vanilla. You cut out two rounds of pastry, place the filling in the middle of the first round, cover with the second round, glaze, pop in the oven and voilà — a cake fit for a king.

For the record, the word ‘galette’ is used in French cuisine to designate anything that is round and flat. A savory crepe made with buckwheat flour, for example, is called not a crêpe but a galettte. Potato pancakes are galettes de pomme de terre. And so on.

I am posting this recipe now to give you plenty of time to consider preparing your own kings cake this year. Beloved by young and old alike in this part of the world, a galette des rois would make a fine addition to your holiday menus. Speaking of which, an updated selection of holiday menus is available here.