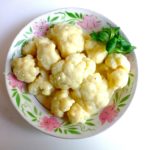 Hello and happy new year! After all the celebrating, this light but satisying dish of cauliflower in a velvety cheese sauce will hopefully help you get 2020 off to a good start. Don’t be put off by the fancy name — the Brits call it simply ‘cauliflower cheese’. But the French version is slightly different. Mornay sauce is a Béchamel, or cream sauce, enriched with an egg yolk as well as with Gruyère-style cheese. But who, you may ask, is Mornay?

I asked myself the same thing and had a heck of a time coming up with an answer. My (relatively) new, 989-page encyclopedia of French cooking, Le Grand Larousse Gastronomique,  includes four entries on sauce Mornay: a definition, a brief entry on how to make it and two recipes that use it (over sole fillets and over any cooked fish set in a the shell of a sea scallop, in both cases browned in the oven). Interesting, but nothing is said about the origin of the sauce’s name. So I started browsing the web.

It appears that the sauce was created in the 19th century at the ultra-chic (at the time) restaurant Le Grand Véfour, which sits beneath the arcades of the Palais Royal gardens in the heart of Paris. It may have been named for a nobleman who frequented the establishment, the Marquis de Mornay, or for his brother, the count of Mornay. There seems to be no agreement on this point, however. Others who dined there included Victor Hugo, Colette (who lived virtually next door) and many other writers and political figures. The restaurant, originally a café, knew such success when it was taken over by its namesake, Jean Véfour, that he was able to retire within three years.

A few years after I began working as a journalist in Paris, I had the occasion to visit Le Grand Véfour to interview its star chef, Raymond Oliver, for a radio program in English. The time was the early 1980s and the theme was the French Christmas dinner. Monsieur Oliver, a charming man, regaled me with stories and descriptions of Christmas dinners past and present. But though I also deployed all my charm, he did not invite me to dine there, alas, and I never had the occasion to do so afterwards.

I did go back once, however, when Le Grand Véfour was bombed by unknown assailants on Dec. 23, 1983. I was the duty reporter for Reuters that evening and had been enjoying a pre-Christmas dinner with a man I fancied at a much humbler restaurant on the Left Bank when the call came through. So much for that. I had to find a cab and race over there. The scene was chaos. Twelve diners had been wounded and Raymond Oliver was beside himself. Happily, though, the restaurant reopened and is still serving diners today.

Returning to sauce Mornay, it was apparently served at first over barbue, or brill, a flatfish similar to a turbot, but its range has expanded in modern times. You can find it in recipes for eggs benedict, pasta, salmon, sea scallops and veggies from broccoli and brussels sprouts to leeks and asparagus. And, of course, cauliflower. Often, a dish bathed in Mornay sauce is popped into the oven to brown, in the process becoming a gratin. As for the cheese to use, in France it is always Gruyère, Comté or a similar cheese, while in Britain the go-to cheese is cheddar. Feel free to experiment.

One more detail (on the etymological front). When looking into the origin of the sauce’s name, I knew it had referred to a person, not a place, for a simple reason. The word ‘Mornay’ was capitalized, while place references in French cuisine never are. For example, la sauce hollandaise, which points to Holland, takes a small ‘h’, while la sauce Béchamel, named for Louis de Béchameil, takes a capital ‘B’. Similarly, if you are mentioning the French language in French, it’s le français (small ‘f’). Interesting, no?

This entry was posted in 8. Vegetables. Bookmark the permalink.