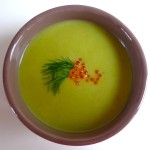 How to turn a simple soup into a festive occasion? Add a spoonful of fish roe and a smattering of fresh herbs. I first encountered roe on soup at my favorite neighborhood bistro, Le Repaire de Cartouche. They served cauliflower soup with tiny black herring roe on top, and I have to say it was divine. In this recipe, asparagus soup is served with fresh dill and a bright spoonful of trout roe. Festive! I’ll leave you to judge whether it’s divine…

Now some news from Paris. The country is riveted — or should I say riven — by a debate over what the young Socialist minister of education is cooking up in order to reform French school system. As the mother of a child who is experiencing this system, I can say that it is definitely in need of reform. But…

The debate is about whether to scrap classes in Latin and Greek from the middle school curriculum, and how to revise the teaching of history (as someone who worked as a journalist in the USSR, I can testify that revision of history is a delicate business). The idea is to make the schools less elitist and more embracing of France’s multiethnic population.

As things stand now, 80 percent of the teachers throughout France will strike on Tuesday, effectively shutting down the schools. One of their main objections — ironically in a country known for educational rigidity — is that the reforms would give schools greater autonomy. The teachers also contend that the proposed changes to the curriculum would in fact increase inequality in the schools, not reduce it.

Not just the teachers are upset. Faced with howls of protest from across the political spectrum over the idea that ancient languages would no longer be offered from the age of 11 as an option, the education minister, Najat Vallaud-Belkacem, has backtracked, proposing that Latin and Greek still be taught, for fewer hours a week.

But the proposal that has generated the most heat is that studying the history of Islam would become mandatory for 12-year-olds, while the history of Christianity in the Middle Ages would be optional. Even though both Islamic and Christian history are already part of the middle school curriculum, this proposal has elicited outrage from many quarters — even from those who recognize the need for France to be more inclusive of its large Muslim population, especially given the rise of Islamist radicalism.

According to one critic, Alain Finkielkraut, a prominent Jewish intellectual, the changes mean that ‘the school of knowledge will give way to the school of therapy through lying.’ And his is one of the milder voices in this virulent debate. Vallaud-Belkacem, 37, who was born in Morocco, has responded to her critics by calling them ‘pseudo-intellectuals.’

She has faced heat before, notably over her efforts to introduce gender equality in French schools. But this time, in the wake of the Charlie Hebdo and kosher supermarket massacres in January, she is responding to a campaign by President François Hollande to make the French school system more relevant. This is his proposed remedy for the massive disaffection of young people within France’s Muslim community.

In the meantime, due to severe cutbacks in education funding by President Hollande’s predecessor, Nicolas Sarkozy, this entire debate has an air of irreality. In my daughter’s Parisian lycée, for example, the physics teacher went on sick leave in mid-October and did not return until January. With no substitute brought in, the pupils were out in the streets. But that was nothing compared to the absence of the French teacher, who went AWOL at the start of October and was not replaced until mid-March.

So while teachers are in the streets protesting the reduction of hours of courses in Latin and Greek, the French schools are unable to provide regular education in this country’s most basic subject: French. No substitute teachers were available due to the budget cuts, parents were told. And since the French school system is competitive and the pupils will face nationwide tests on lessons they didn’t receive, everybody in the affected classrooms suffers, whatever their background.

It’s enough to make you dive for a warming bowl of asparagus soup, with a glass or three of strong red for fortification.