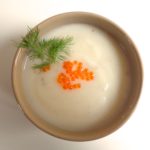 The humble cauliflower takes on elegance and class when transformed into crème de chou-fleur, a magnificent winter soup that is both light and packed with vitamins. It is essentially a purée of cauliflower with a spoonful of cream. Ground coriander seeds, lemon and dill enhance the flavor, while trout roe adds a bright touch — and more flavor. It makes a satisfying lunch dish and sparkles as a first course at dinnertime. Try it and see.

It took me a long time to embrace cauliflower, a vegetable many of us remember from childhood as dreary. Moving to France helped — chou-fleur translates as ‘cabbage flower’, a linguistic tweak that somehow changed my perception. As did the many French ways of preparing the pretty white flowerets: as a gratin, as a purée, as a savory tart, as an addition to an assiette de crudités, or sautéed with a bit of garlic.

Cauliflower has been in favor in France for more than 400 years, since Louis XIV had it grown in the gardens of Versailles. And it’s played it’s role in French history. When the calendar was redrawn after the French Revolution, with names tied to the seasons — Brumaire (foggy) for October-November, for example, and Floréal (flowery) for April-May — chou-fleur had its own day, the 7th of Frimaire (cold), which fell on November 27.

These days cauliflower comes in a rainbow of colors, from orange to green to purple, and in forms from round to spiky. These newfangled varieties are on sale across the street from me at Maison Plisson, but I admit I have yet to try them. Would you believe purple soup? No, the classic variety is just fine.

This entry was posted in 2. Soups and tagged cauliflower, chou-fleur, recette, recipe, soup. Bookmark the permalink.