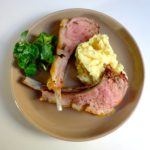 When is a lamb chop not a lamb chop? It may seem a minor distinction, but here in France a carré d’agneau (rack of lamb) is considered a different dish altogether than côtelettes d’agneau (lamb chops), the difference being that the meat is tender on all sides when the rack is sliced. The elegance makes it a dish for special occasions. Served with a sophisticated purée, for example of parsnips and cumin, it will add a touch of class to your table.

And then there is the difference between carré d’agneau and rack of lamb. In the French version, the rack is prepared by the butcher in a special way that in English is (amusingly) called being ‘Frenched’. What it means is that the ends of the ribs are exposed and the bottom bones cut away, which makes for easy slicing at the table. 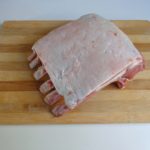 A little lore was passed along to me by Robin from the butcher counter at Maison Plisson, a fine grocery across the street from me in Paris. He said this style of preparation began long ago, when meat was still being grilled over a fire — the idea being that the chops were easier to eat if they had a handle. That is still true today, although most diners now prefer a knife and fork.

If you are cooking for several people, you can go totally French and prepare what is called a garde d’honneur (honor guard). This involves using two racks of lamb of similar size and roasting them standing up and facing each other, with the ribs interlinked. Very impressive when brought like this to the table.

Some recipes for carré d’agneau call for coating the meat with a mixture of breadcrumbs, parsley and mustard before roasting, but I find that this obscures the delicate taste of the lamb. I prefer it coated in olive oil and with a light sprinkling of rosemary and garlic.

As for the purée, it is an Everyday French Chef invention that proved its merits when served to a friend, who pronounced it ‘a winner’.

If you don’t have access to a butcher who can prepare the rack for you French style, not to worry. You can attempt it yourself. There is a word about this on the recipe page. And once the rack is prepared, the dish can be produced in half an hour. Elegant, quick and easy.