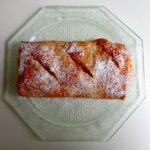 Some days you just need comfort food — so why not make an apple strudel? This delightfully flaky dessert has been popular in France since it was introduced at Versailles by Marie-Antoinette, who came here from her native Austria after marrying the future Louis XVI. It is exceptionally easy to make these days thanks to the availability of filo dough, which eliminates the painstaking step of stretching out kneaded dough until it is paper thin.

Marie-Antoinette would have enjoyed other types of strudel when growing up in Vienna. Strudels filled with soft cheese, sour cherries and poppy seeds were all popular at the time. The pastry, defined by its rolled-up shape (strudel translates as ‘whirlpool’), can also be filled with meat or vegetables. It is said to derive from Turkey’s baklava, which entered Austria during the Ottoman occupation. It has many cousins, among them savory cheese pies like Greece’s tiropita, itself a variety of southeast Europe’s borek (watch this space).

You may be wondering whether strudel was what Marie-Antoinette had in mind when, upon being told that the peasants had no bread, she said ‘Let them eat cake’ — words reputed to have helped spark the French Revolution. Although whether she actually said this is far from sure, what is certain is that the phrase has nothing to do with strudel. In French it’s ‘qu’ils mangent de la brioche‘ (rough translation: ‘let them eat egg bread’).

Things didn’t end well, of course, for Marie-Antoinette, who lived a life of opulence and splendor only to be arrested, imprisoned and finally guillotined in public at the Place de la Révolution, today’s Place de la Concorde. Such are the risks of power when it is abused — glitz and wealth offer no protection. As we endure this bleak January, with or without strudel, we can take comfort in imagining that this may still hold true today.