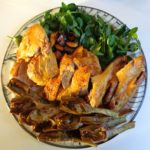 Roast duck is a festive dish in any season, but perhaps never better than in winter, enjoyed with a glass of hearty red beside a crackling fire. In this recipe, the duck is coated with a glaze of honey, thyme and balsamic vinegar, with garlic added to the roasting pan for a dish imbued with the flavors of southern France. Want to stay with the provençal theme? Serve the duck with pan-seared baby artichokes, this week’s second recipe.

Now let’s talk about French duck. When I went to the market to order the duck for this recipe, I was told very firmly by my poultry man, Didier Breton, that I couldn’t get a canard (male duck) at this time of year, but would need to get a canette (female duck). This is because they save the larger males to put on the market closer to Christmas.

Monsieur Breton said he could offer me a canette de Barbarie, a breed of duck that, oddly, is primarily known as ‘Muscovy duck’ in English and as ‘creole duck’ in Spanish. Upon investigation, I discovered that the Barbary duck looks somewhat akin to a turkey, with red wattles around the bill. This is all academic, however, as when I went to pick up the plumed bird, it looked just like any other duck.

Not at all, said Monsieur Breton, who informed me that the four main breeds of duck used in French cuisine are all rather different, and that one of them — the canard mulard — is mainly reserved for the making of foie gras. The advantage of the canette, he added, is that it’s small enough to make a pleasant holiday meal for two to three people — a good solution if you happen to be celebrating in a small group. 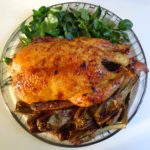 Duck is served in many guises in France, although it is rather rarely seen roasted whole. The most common versions are magret de canard, or duck breast, for example in a sauce made with cassis — black currant liqueur — and confit de canard, in which the duck is preserved in salt and duck fat.

Duck is indeed so popular in France that it has entered the lexicon in various amusing ways. As a young journalist, I loved it when I learned that un canard also meant a newspaper. And back in the days when I still went out on dates, I enjoyed it when, after a meal, a snifter of cognac was brought to the table with, beside it, a lump of sugar with which to faire un canard (you dip the sugar into the cognac, like a duck dipping into a pond). Meantime, in Paris these days, il fait un froid de canard, meaning it’s cold as the dickens — literally, it’s cold as a duck.

As for the artichokes, I thought they’d make a nice change from the usual seasonal vegetables like pumpkin, sweet potatoes or celeriac. The artichoke season theoretically ends around October in France, but these days artichokes seem to stay on the market much longer. It’s an easy recipe, and one that may grace your table at any time of year.

For more ideas about what to serve during the coming festivities,  check out this site’s Holiday Menus page. And…