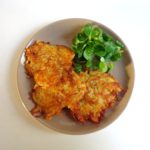 There is an art to making potato pancakes, known in French as galettes de pomme de terre, or potato flat cakes. The basic recipe is very simple — grate the potatoes, mix with a beaten egg, season with salt and pepper, and fry in oil or duck fat. A humble dish served in many forms around the world, potato pancakes are supremely satisfying when they come out crisp and light. But achieving this is more difficult than one might think.

I know, because I have been making potato pancakes once a year for as long as I can remember. The occasion is Hanukah, the eight-day festival of lights, which is celebrated by Jews around the world in late November or December, usually before Christmas. This year, in a rare confluence of the moon and the Western calendar, Hanukah begins on Christmas Eve. One night or another during the week, guests will come by and we will begin our festive meal with potato pancakes, aka latkes.

However, potato pancakes may be enjoyed on any occasion. They make a great side dish for roasted poultry or meat, and could also feature nicely in a festive Christmas dinner.

Potato cakes are perhaps most familiar to the French as rösti, a specialty imported from across the border in Switzerland. In that version, the cake is larger and thicker, more akin to American hash browns. German potato pancakes tend to include flour and baking powder, a definite no-no in my opinion. What you are going for is a cake that is lacy and light. This also precludes using mashed potatoes, as some recipes suggest.

So how to get it right? One trick is to press the grated potatoes dry with paper towels before adding them to the egg. This will remove some of the starch. Some recipes call for actually rinsing the grated potatoes, but I find it’s not necessary. The other key is to fry the pancakes in plenty of oil or, if you have it on hand, duck fat.

Some Jewish families serve potato pancakes with a little chopped onion or sour cream/crème fraîche on the side. My mother liked to serve them with applesauce. Personally, I prefer them on their own.

In this darkest season, they add a cheery note. Happy holidays!