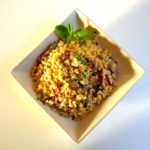 A guest was coming to dinner, a friend from the literary world. I didn’t want to have to spend a lot of time in the kitchen while he was here, yet wanted to produce a satisfying, palate-pleasing meal. What to do, what to do? After some considerable thinking, the solution appeared: Russian-style gravalax and beet-lamb’s lettuce salad followed by grilled guinea fowl, bulghur with red onion and mint, and sweet potato purée.

The date was November 7. Without realizing it, I had concocted a menu that tipped its hat to the former USSR — on the 100th anniversary of the Russian Revolution! Most of the dishes were variations, with a French touch, on food served in Russia, the Caucasus and Central Asia. The exception was the sweet potato purée, which I never encountered there but which was on my mind with the approach of Thanksgiving. As was the bulghur dish, which pairs brilliantly with poultry of any kind. And everything could be prepared in advance, including the guinea fowl breasts, which I marinated in olive oil, garlic, cumin and ground coriander and popped into the oven while we were having the starter.

In this week’s main recipe, bulghur’s nutty flavor is enhanced by the addition of sautéd red onion rings and zesty fresh mint. It’s a dish I invented last summer and have since served many times, as it proved to be a crowd pleaser. Unlike tabbouleh salad, which uses bulghur but is served cold, this dish is best warm or at room temperature. Despite its humble nature, it may surprise you. A friend who came over during the July heatwave liked it so much that she insisted I post it on this site. Et voilà. 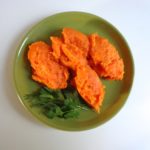 Moving on to the sweet potatoes, this is an ultrasimple recipe for a classic dish that is served every year in the United States in late November. But this succulent purée marries well with many dishes other than turkey and can be served throughout the autumn, or even throughout the year.

However, if you are thinking ahead to your Thanksgiving menu and would like to give it a French touch this year, you may also wish to try:
— Roast turkey, French style, a recipe kindly contributed by the three-star chef Georges Blanc, in which the turkey is stuffed with ground veal and pork flavored with thyme and walnuts and is served surrounded by roasted fresh figs;
— Pumpkin gratin, another Georges Blanc creation, in which the pumpkin is flavored with garlic, nutmeg and heavy cream and topped with grated Comté cheese;
— Pumpkin purée with parmesan, my own creation from a few years back;
— Sweet potatoes with herbs;
— Green beans, French style;
And for dessert:
— French apple tart;
— Pear tart with almond cream;
— Chestnut mousse.

Meantime, the Menus section has been updated for autumn, with new selections for everyday and weekend cuisine for all, and special pages for vegetarians and vegans.