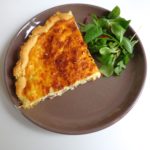 You can find quiche lorraine in virtually any bakery or deli in France, but it is even better when made at home. The rich filling of eggs, milk cream, bacon and cheese fluffs up in the oven to marry delightfully with a buttery homemade crust. Served with a crisp white and a salad of tender leaves alongside, it makes a fine lunch dish or a great starter at suppertime. If you cut it into little squares, you can also serve it with drinks at cocktail hour.

Unsurprisingly, this quiche hails from the Lorraine region of northeast France. It has gone through many permutations over the centuries, the most recent of which is the addition of cheese. Purists may tell you there should be no cheese at all in a quiche lorraine, and they would be right, historically speaking. But cheese, which deepens the flavor, is often included these days. For the record, the great chef Paul Bocuse includes cheese in his quiche lorraine recipe, and that’s a good enough recommendation for me.

Another difference from years gone by is the crust. Nowadays, quiche lorraine typically uses a pâte brisée, or savory crust. But when they first started making this dish in Lorraine, back in the 16th century or perhaps even earlier, the filling was encased in bread dough and the quiche was baked in communal village ovens on baking day — a convenient way for home bread bakers to use up any leftover dough.

These days, cubed ham is sometimes used instead of bacon, and the bacon itself is sometimes included in the filling uncooked (although I wouldn’t suggest that). Quiche lorraine is often sold in individual portions, made in tart pans about 4 inches (10 cm) wide, and if you have pans that size you can make about six from this recipe.

Lorraine lies close to Germany, separated only by Alsace, and the culinary roots of quiche are evident in its name. It derives from the German word kuchen, meaning cake, which in French came to be pronounced kichen (KEY-shen) before morphing into the present-day quiche (keesh). The dish bears some resemblance to the Alsatian dish flammekueche, aka tarte flambée, a fine-crust tart with bacon.

You can take a shortcut to making this quiche by using store-bought pie dough. But if you have the time and the inclination, make the dough yourself. It is far superior, and your guests or family will appreciate it. Happy cooking.

This entry was posted in 4a. Savory Tarts and Tartines and tagged quiche lorraine, recette, recipe. Bookmark the permalink.