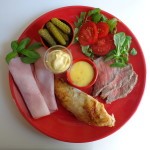 The infamous rivalry between the French and the British is perhaps expressed most explicitly in their traditional slurs for each other, each of culinary origin: ‘the frogs’ and ‘les rosbifs’. Sure, the French eat cuisses de grenouille (frogs’ legs) and the British love their roast beef. But can this explain why a French dish that appears on so many bistro menus is called an ‘English plate’? The only explanation I can find, and I’ve been scouting around, is that this platter of cold roast meats almost always includes … roast beef.

This is the kind of dish you can prepare in advance on a summer’s day, leaving you cool, calm and collected when company arrives in the evening. There is no standard combination of meats, as I found when I searched the web and my collection of French cookbooks — none of which, oddly, included a recipe for assiette anglaise, not even Julia Child. According to some sources, the platter should include not just roast beef and cold cuts, but also boiled beef tongue. This I have never seen in France, and my advice, based on personal taste, would be to avoid it. But roast chicken, roast pork, roast lamb, roast duck, roast turkey would all fit well on the platter, along with a small dish of homemade mayo, some Dijon mustard and some pickles.

As for the Franco-British rivalry, it dates back at least to 1066 when William the Conqueror crossed the Channel from Normandy to invade Sussex, fell down on the beach, grasped a handful of sand and proclaimed, ‘I now take hold of the land of England.’ (The source for this interesting tidbit is The Independent.) Since then, the two great nations have had at each other on the battlefield (Trafalgar and Waterloo), at sea (the sinking of the French fleet by the English off Algeria in 1940), in the sporting arena, in linguistic jousting and, more to the point on this site, in matters of food.

‘One cannot trust people whose cuisine is so bad,’ Jacques Chirac, the former French president, once remarked of the British. But is it really? Not in my opinion, at least not these days. I do remember going to England in the 1970s and being served terrible pub food of various sorts, from soggy Cornish pasties to frozen peas. But those days are long past and many food critics now say that bistro cuisine is better in London than in Paris. Unfortunately for those of us who rely on Air France, the food served on board has gone steeply downhill and is far inferior to the cuisine on British Airways. Et cetera.

Leaving that argument aside, various English friends of mine are fabulous cooks: creative, subtle, and often with that wacky little je-ne-sais-quoi inventiveness that imbues the British sense of humor (humour). So let’s drop all those stereotypes about British cooking. This being said, this is a French culinary blog and nothing will ever make me change my opinion that French food is the best in the world — possibly because this country’s regions have produced such a wide and wonderful variety of great dishes.

Nonetheless, from time to time the French pinch a dish from their neighbors, the assiette anglaise being a prime example — in spirit if not in reality (I’ve never seen this dish in England, but if I’m wrong please correct me). And from time to time, the British really get it right, for example in sneering at frogs’ legs. French friends tell me they are fabulous, but I couldn’t say, having never tried them. Green slimy things? Even with garlic butter, I’m not about to go there. Still…